Last month, when Democratic Congresswoman Alexandria Ocasio-Cortez canceled her participation in an Americans for Peace Now event commemorating assassinated Israeli prime minister Yitzhak Rabin, Israelis on both the left and right reacted strongly to the rebuff from this charismatic rising star of the Democratic party.

Jonathan Tobin, writing in the pro-Netanyahu daily Israel Hayom, opined that for Ocasio-Cortez and her cohorts, all Israelis are alike no matter their political leanings.

“Those who, like ‘The Squad’ and their fellow travelers on the left, believe in intersectional canards about the Palestinian war on the Jewish state being morally equivalent to the struggle for civil rights in the United States, see all Israelis as alike…” he wrote. 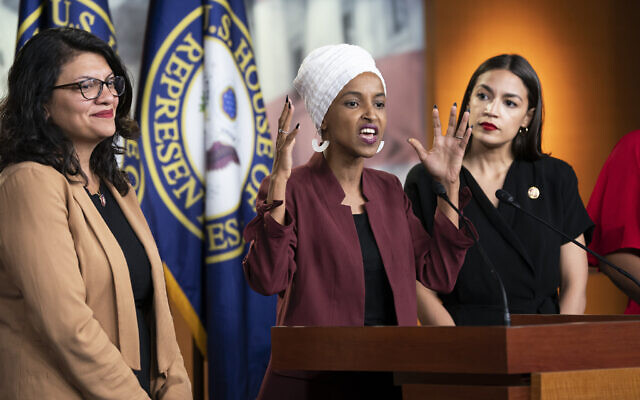 US Rep. Ilhan Omar, flanked by US Rep. Rashida Tlaib, left, and US Rep. Alexandria Ocasio-Cortez, responds to remarks by US President Donald Trump after he called for four Democratic congresswomen of color to go back to their “broken” countries, at the Capitol in Washington, July 15, 2019 (AP Photo/J. Scott Applewhite)

But in the case of Ocasio-Cortez, in particular, Tobin is mistaken. Not all Israelis are alike. In fact, it has fallen largely under the radar that during part of the period between her graduation from Boston University in 2011 and her election to Congress in 2018, she held two positions in which she worked under the auspices of two Israelis.

Ocasio-Cortez’s official House of Representatives biography does not mention these two positions, focusing instead on a post-college position she held as educational director with the National Hispanic Institute and on stints as a bartender and waitress. Similarly, the acclaimed 2019 Netflix documentary “Bring Down the House,” which follows Ocasio-Cortez during her successful June 2018 primary bid in New York’s 14th district, shows her working as a bartender.

“They call it working class for a reason,” she said in the documentary as she hauled buckets of ice and mixed drinks, “because you are working nonstop.”

But elsewhere on the internet, there are traces of Ocasio-Cortez’s less publicized gigs, in which two Israeli-Americans figure — Joe Raby and Chen(i) Yerushalmi, men associated more with the world of venture capital and startups than with the working class.

It was under the aegis of these men that Ocasio-Cortez prepared curricula teaching entrepreneurial and self-presentation skills to ambitious young college students and graduates in the Bronx. These skills, which she helped teach to others, may have been instrumental in her own political rise.

Alexandria Ocasio-Cortez’s spokesperson, Lauren Hitt, told The Times of Israel that the names Cheni Yerushalmi and Joe Raby “are not ringing a bell with us over here. It may be a fairly tenuous connection.”

Public sources, however, indicate that Yerushalmi was Ocasio-Cortez’s boss at a company called Gage Strategies, while Raby vetted candidates for the Sunshine Bronx business incubator that she applied and was admitted to. Ocasio-Cortez herself publicly associated with both these employment experiences over a period of five years prior to her election to Congress.

An incubator and a book publishing company

A biography for a September 21, 2013, talk Ocasio-Cortez gave at Boston University, her alma mater, describes her as the “founder of Brook Avenue Press, a social enterprise dedicated to providing relevant educational products to children and parents in urban areas.” 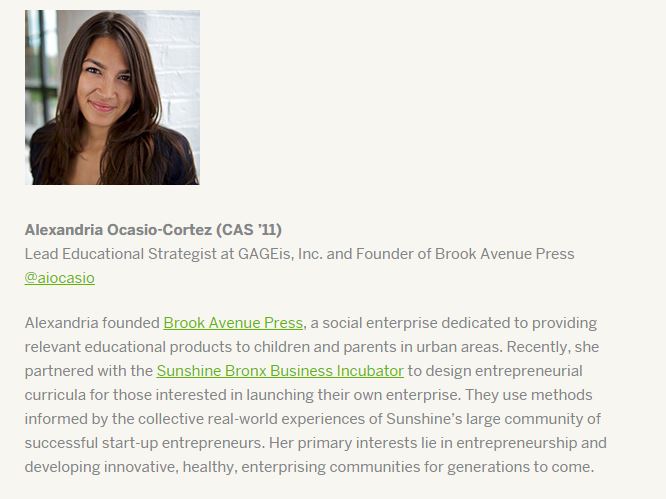 She is also described on the same website as the “Lead Educational Strategist at GAGEis, Inc.”

Both the Brook Avenue Press and GAGEis (also known as Gage Strategies) operated from the Sunshine Bronx Business Incubator, a city-subsidized co-working space launched in 2012, where for about $200 a month entrepreneurs could take advantage of workspaces, conference rooms, mentoring and business training. Raby and Yerushalmi, its owners, were seasoned entrepreneurs in the co-working industry who had won a city contract in 2009 to develop the incubator with financial support from the city.

Ocasio-Cortez’s startup Brook Avenue Press was chosen to participate in the incubator program in 2012.

In a 2011 video she recorded shortly after graduating from college, a younger, less polished Ocasio-Cortez described the publishing startup she would go on to develop while at the Bronx business incubator.

“What Brook Avenue Press seeks to do is develop and identify stories and literature in urban areas” for kids, she said.

Despite the fact that participants paid rent to the incubator, there was an application and interview process to get in.

Joe Raby, who a year later would run a major venture capital fund in Israel, described the vetting process in a January 2012 press release.

“We’re different from a traditional incubator because we won’t accept you if we don’t think we can help you succeed,” said Raby, the incubator’s co-founder and managing partner.

“We try to understand your business objective, and create the bridges and opportunities that will help you achieve and measure it.”

Ocasio-Cortez may have gained some early political experience as well while working at the incubator owned by the two Israelis. In August 2012, she, owner Cheni Yerushalmi and a few other incubator participants lobbied for federal legislation that would allow Bronx entrepreneurs to deduct a higher percentage of their startup costs from their taxes.

“Young entrepreneurs are playing a special role in developing promising, creative enterprises for our future and a small break can open up their resources for hiring, creating a new product, or reinvesting in the local economy,” Ocasio-Cortez said in a press release. 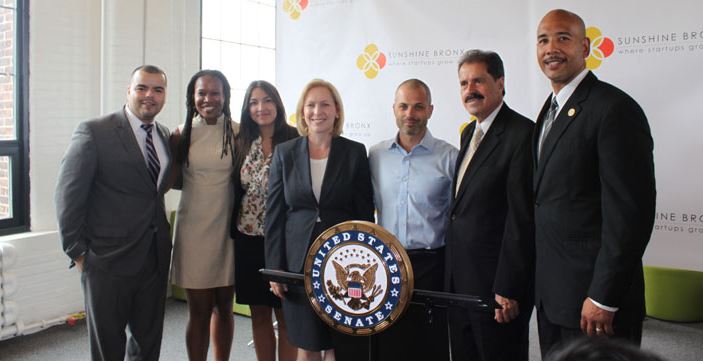 Ocasio-Cortez not only developed her publishing company while at the incubator, but also worked as a curriculum developer for a related company called GAGEis, Inc. or Gage Strategies, also run by Cheni Yerushalmi, according to multiple public sources. Online photos of GAGEis activities show lectures that took place at the Sunshine Bronx incubator.

Gage Strategies’ purpose was to teach college students and recent graduates how to burnish their professional image and marketability. Modules of the training program included headings like “strategy,” “branding,” “networking,” and “confidence.”

A 2014 screenshot from the website for Gage Strategies, where Alexandria Ocasio-Cortez worked helping college students and young graduates improve their professional image (Screenshot)

Ocasio-Cortez continued to associate herself with Yerushalmi and Raby’s incubator for several years. In August 2017, after she announced she was running for the Congressional primary in New York’s 14th Congressional District, a C-SPAN broadcast identified Ocasio-Cortez as “Brook Avenue Press Founder” and “GAGE Strategies Educational Strategist.”

This, despite the fact that the Sunshine Bronx business incubator shut its doors in 2014, according to The Real Deal.

The Brook Avenue Press website is no longer online, nor are any archived pages of the website available. The state of New York dissolved the company in October 2016 due to lack of activity. It was still registered at the Sunshine Bronx address. 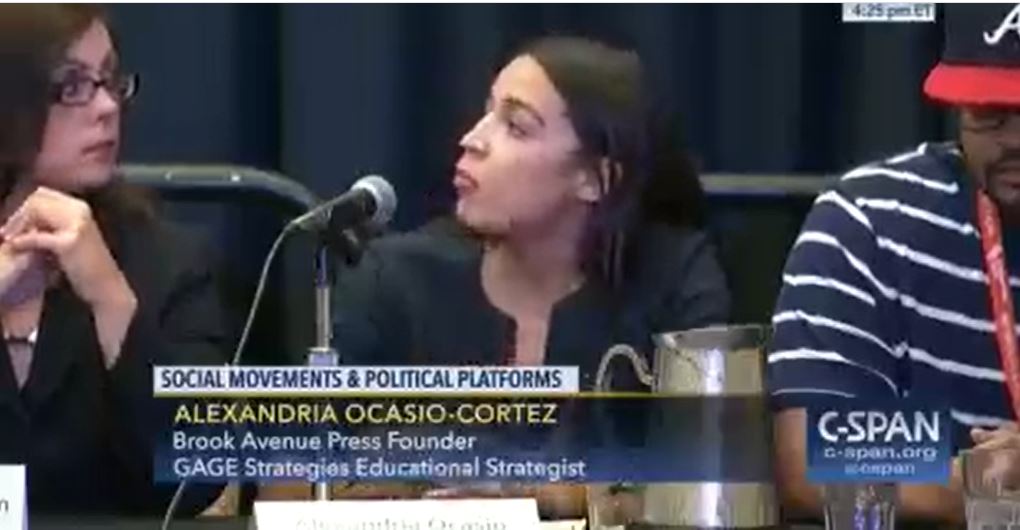 Yerushalmi is the son of an Israeli couple who moved to the United States when he was a child. Raby is the son of Iraqi immigrants to the United States. The two men grew up together on Long Island, according to media reports. They launched their first co-working space, Sunshine Suites, in 2001, which had two locations in Manhattan. Yerushalmi told an interviewer in 2010 that he and Raby had funded their endeavors with the help of friends and family. 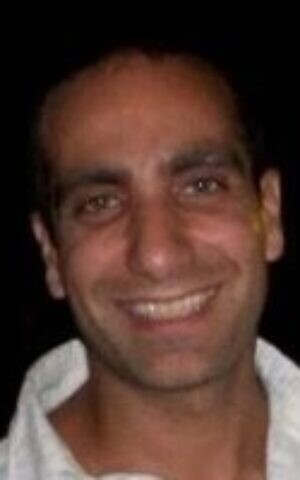 Outside of work, Cheni appears to have a passion for Burning Man-like festivities, including Burlesquerade, an annual costumed gala on a 30,000-square-foot “super yacht” that reportedly brings together Wall Street bigwigs, techies and artists.

He also founded the “Pynk Collective” in Vermont, which, according to his LinkedIn page, is “a collective of 240+ friends who come together in celebration of life and community in a special valley in Bridgewater, Vermont.”

By November 2012, Raby had moved to Israel and become director of operations of an Israeli venture capital firm called the Tel Aviv Angel Group, which later merged into Maverick Ventures Israel, where Raby was “director of finance and operations” from October 2013 to December 2018.

The Tel Aviv Angel Group and Maverick Ventures were reportedly (Hebrew link) founded in 2008 by Mark Gerson, the New-York based co-founder of the Gerson-Lehrman Group, together with Yaron Karni, a young Israeli entrepreneur whom Gerson had asked to scope out promising Israeli startups on behalf of himself and a small group of wealthy investors.

In March 2015, according to his LinkedIn profile, Raby became the COO of an Israeli virtual private network provider called SaferVPN. The company was located inside the offices of Maverick Ventures. The company offered free VPN services to dissidents in authoritarian regimes. A 2017 description of the company on a website of the Israeli Economy Ministry claimed that “SaferVPN boasts more than a million users in more than 240 countries, with the largest number of customers from the United States, Russia, China, United Arab Emirates, United Kingdom and Turkey (in that order).”

SaferVPN’s New York office was located in the same building and on the same floor as Sunshine Suites NOHO, one of Raby and Yerushalmi’s three co-working spaces.

In March 2015, Raby became a director of the Israeli startup StoreSmarts, a data analytics company that tracks shoppers’ behavior in stores using their phones’ WiFi signals. One of Raby’s co-directors at StoreSmarts was Lev Binzumovich Leviev, a co-founder, with Vyacheslav Mirilashvili and Pavel Durov, of the Russian social-networking site Vkontakte. (Leviev and Mirilashvili sold their 48 percent stake in the social networking company to Rosneft board member Ilya Sherbovich in April 2013).

In March 2016, StoreSmarts reportedly provided its technology free of charge to the Free Brazil Movement to help organizers estimate the size of a mass demonstration against the government. 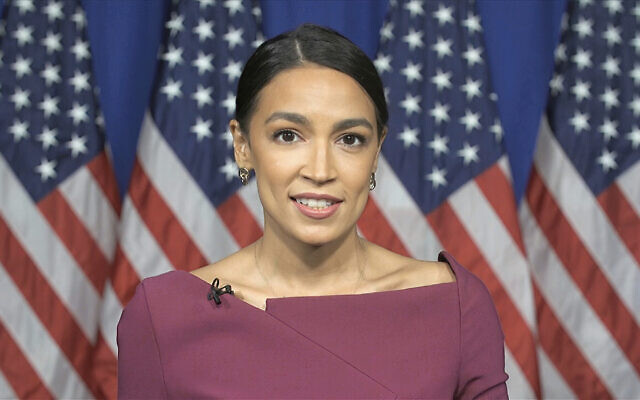 The Times of Israel reached out to Ocasio-Cortez to learn more about her time at the Sunshine Bronx incubator and Gage Strategies as well as her interactions with Yerushalmi and Raby. Her spokeswoman Lauren Hitt said she would “do some digging to see if I can find anything, but it may be a fairly tenuous connection.”

She added, “I wish I could be more helpful but I’m not sure that they did have any meaningful interaction, but let me look into the matter and get back to you.”

The Times of Israel also contacted Joe Raby and Cheni Yerushalmi to ask about their time working with Ocasio-Cortez. We had not heard back from them by the time of publication.

Peace Now held its Yitzhak Rabin commemoration event online last week, with some 1,700 participants. Ocasio-Cortez was not among them.