Representatives of the Chinese-owned video-sharing app TikTok came under fire in the Knesset on Wednesday for allegedly failing to combat the spread of anti-Semitism on their network.

At a hearing of the Knesset Immigration, Absorption and Diaspora Affairs Committee Wednesday morning on the topic of anti-Semitism on social media platforms, Knesset members accused the controversial social media giant of failing to stop the spread of viral videos that the MKs said denied, made fun of, or cheapened the memory of the Holocaust.

TikTok had refused to participate in two earlier Knesset panels on the subject of online anti-Semitism but on Wednesday two representatives joined the session via Zoom — Elizabeth Kantor, director of government relations and public policy UK, Ireland and Israel, and Erik Shadowens, TikTok’s policy manager.

While representatives of Google, Facebook and Twitter were also in attendance,  Knesset members’ opprobrium was directed most pointedly at TikTok. 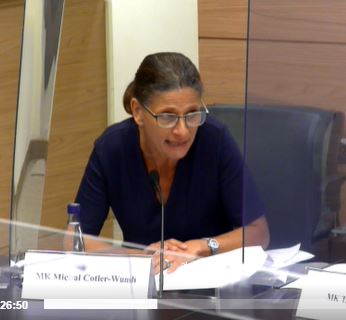 “We see evidence that [Holocaust-denial] hasn’t been removed,” MK Michal Cotler-Wunsh told a representative of TikTok.

“I am pleased that after their notable absence at our past two hearings, that TikTok has now chosen to take this first step in accepting responsibility for the virulent anti-Semitism on its platform,” she said.

TikTok is a social media platform popular with teenagers in which they can create short 3-15 second music, dance comedy or talent videos. It is owned by the Chinese company ByteDance and its Chinese provenance has raised concerns among critics about possible data security weaknesses and even foreign espionage.

Cotler-Wunsh cited a song that went viral on TikTok in July as an example of this phenomenon. The song’s lyrics were “We’re going on a trip to a place called Auschwitz, it’s shower time,” and was accompanied by various user-generated videos that collectively got millions of views.

She pointed out that TikTok enables very young users to be exposed to both anti-Semitic and Holocaust-distorting content.

“What steps is the platform taking to address this abhorrent phenomenon and ensure that such anti-Semitic content is addressed prior to it reaching millions of users?” Cotler-Wunsh asked.

“In order to address a problem it must first be defined,” Cotler-Wunsh said. “Thus, TikTok must adopt and implement the IHRA definition of anti-Semitism — which includes the use of Holocaust rhetoric and denial as well as the delegitimization, demonization, and double standards — and utilize this consensus definition to flag anti-Semitic content and to educate the public.” 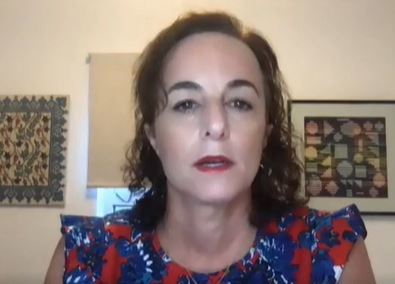 MK Yosef Taieb (Shas) expressed the view that TikTok should also remove content that is anti-Israel. He said he understood this was problematic because it is considered political speech, but added that he had received complaints about TikTok removing content that was pro-Israel.

“Someone put up a video showing that Israel is not racist and [is] democratic and TikTok removed it,” he said. “At least don’t take down content that is pro-Israel,” he urged.

Yaakov Hagoel, Vice Chairman of the World Zionist Organization, told the panel that in his experience, anti-Semitism on social networks quickly translates into anti-Semitism in the streets.

“Nowadays social networks are more powerful than television networks. TikTok is very popular among young people and the anti-Semitic conversation has now moved to the streets. We need to combat this so we can prevent the next murder,” said Hagoel.

“I can feel it in the air,” he said, describing a rising tide of anti-Semitism.

Representatives of TikTok responded that they have been removing Holocaust denial content since January and that they are doing their best to address the problem.

“We are committed to improving our enforcement,” Elizabeth Kantor told the panel, noting that “a Holocaust survivor recently spoke to our trust and safety team.”

Several Knesset members praised Facebook for the social network’s October 12 decision to ban posts that deny or distort the Holocaust.

“I want to thank you and thank you again 10 times,” MK David Bitan, the committee’s chairman said, addressing Cutler.

Meanwhile, Cotler-Wunsh criticized Twitter for its alleged double-standard in flagging the tweets of US President Donald Trump but not those of Iran’s Ayatollah Khomeni, who she said has called for the genocide of Israelis.

“I don’t know if it’s been updated but the Twitter policy was that it is okay to call for genocide against the state of Israel, it’s considered saber-rattling we were told, as opposed to statements by certain politicians that are flagged. And I’m wondering if that’s been addressed,” she said.

Cotler-Wunsh was referring to an exchange during a previous hearing in which her guest, pro-Israel activist Arsen Ostrovsky, posed a question to a Twitter representative. Ostrovsky is an Australian-Israeli lawyer and board member of Nefesh B’Nefesh who works for the Israeli Jewish Congress (headed by former Russian senator Vladimir Slutzker).

Twitter representative Ronan Costello replied that “our approach to anti-Semitism is encompassed by our approach to hateful content, dehumanization, glorification of violence and denial of violent events. Content under those categories has already been actioned at a significant scale.”

Costello mentioned that the social media giant was working closely with a newly minted Israeli NGO called Fighting Online Antisemitism that was flagging content it perceived to be anti-Semitic and alerting Twitter.

“We send them anti-Semitic content that we have noticed that hasn’t been removed so that they can remove it,” Fighting Online Antisemitism head Tomer Aldubi told The Times of Israel by email. “Next month we will have a training session of the NGO’s volunteers with the head of public policy for Twitter in Ireland.”

The Times of Israel asked Aldubi who funds his NGO but he declined to answer. Aldubi previously directed the Israeli Students Combating Antisemitism NGO, funded by the Kantor Center for the Study of Contemporary European Jewry, which is named after Russian oligarch Moshe Kantor. Aldubi said that Kantor is not involved in funding his new venture.

The meeting ended with Cotler-Wunsh and others calling for all four social media platforms to adopt the IHRA definition of anti-Semitism.