The outbreak of the coronavirus and the lockdowns it has led to, along with the recession that will apparently follow, have spurred a lively discussion in Israel about whether the nation’s thriving startup ecosystem should also be in line to get government handouts, in the form of grants or government guaranteed loans.

Some, like the former head of Israel’s National Economic council, believe that government assistance is needed to help startups survive the crisis. Others, including prominent VC fund heads, say Israel should let capitalism do what it does best and let market forces to determine which startups survive without resorting to “socialist” assistance.

Israel had 16,314 confirmed cases of COVID-19 and 238 deaths from the coronavirus as of midday May 6. With the economy at a near-halt, jobless figures spiked to 1,093,000 by mid-April, bringing the unemployment rate to an unprecedented 26% from below 4% pre-coronavirus.

Even with lockdown restrictions now eased as the infection rate has declined, Israel is looking at a negative growth this year for the first time since 2002. The economy is expected to grow a negative 5.4 percent in 2020, according to a Finance Ministry report. This compares with a growth of 3% forecast by the ministry, pre-coronavirus, and a 3.3% growth in 2019. 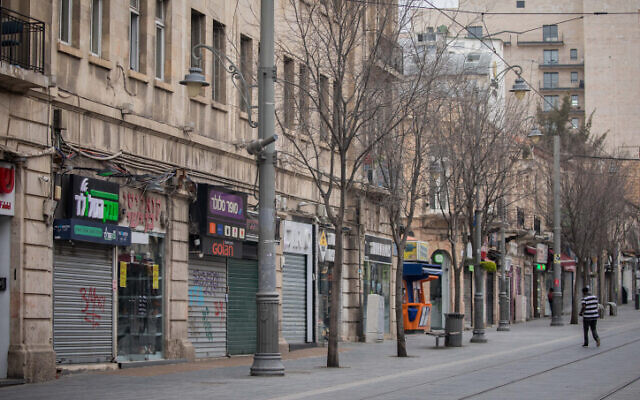 A general view of closed stores on Jaffa Road in downtown Jerusalem on March 26, 2020. (Yonatan Sindel/Flash90)

The recession could be even deeper if there is a second wave of the virus and further lockdowns, the ministry warned. Unemployment this year could reach an average of 13%-14%, the report said, as a drop in local and global consumer demand will deter employers from re-employing workers they have put on unpaid leave.

The spread of the virus has also infected Israel’s thriving tech industry, which in 2019 saw local firms raise a record $8.3 billion from investors and a total of $39.1 billion for the period 2010-2019. Tech exits last year, defined as merger and acquisition deals or initial public offerings of shares, jumped 72% to a record almost $22 billion, according to data compiled by IVC Research Center, which tracks the industry.

The Israel Innovation Authority, in charge of setting out the nation’s tech policies, has forecast that the industry will see a drop of some 25% in private capital investments, and about a quarter in total revenues.

Four out of every 10 startups around the world will die in the next three months if they don’t raise additional funds, according to a report by research firm Startup Genome that looked into the impact of COVID-19 on startup ecosystems worldwide.

Israel has some 6,500 active startups, according to the database of Start-Up Nation Central, a nonprofit that tracks and advocates for the industry, and the nation boasts the highest number of startups per capita in the world, according to IVC.

So, as the government ponders whom to help with the NIS 80 billion rescue package it has earmarked for the economy, should funds go to help startups too?

In unofficial contacts between government officials and members of the tech industry, there is an initiative brewing to set up a support plan for the industry, which provides the highest contribution to Israel’s economic growth of all sectors operating locally even as it accounts for just some 10% of the job market.

The plan, details of which are unclear, envisages giving startups a rescue package of attractive loans to help them through the crisis. Local institutional investors would also be incentivized to put some of their funds into tech firms through a co-investment model, in which the institutions would invest together with VC funds, and get government guarantees for the amounts injected. The plan for tech guarantees for the institutions is being drawn up by the Israel Innovation Authority and is being currently discussed by the government.

Eugene Kandel, the CEO of Start-Up Nation Central, is in favor of the government stepping in to help the startup sector. 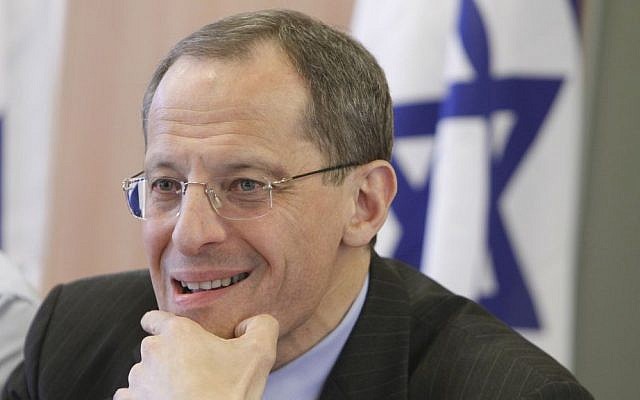 In a time of crisis, bringing calm to the system “is of paramount importance, and only the government can do that,” Kandel, a former head of the Israel’s National Economic Council, wrote in a blog post. Kandel currently also serves as chair of the advisory committee to the National Economic Council, and is actively advising the government, pro bono, on COVID-19-related issues.

“Government action in helping companies in such a crisis is not only compatible with capitalism; in fact, it is essential to restoring the markets and institutions that allow capitalist systems to function,” Kandel wrote.

“There is a debate in Israel and other countries related to whether the government should help the Israeli technological sector, which is seen as much wealthier than the rest of the population,” he wrote. “I argue that the main goal of the government’s intervention in the tech sector is not about bailing out high-tech workers and firms (even though I don’t see them as less important than others). It is all about investing small amounts of public money, and generating HUGE gains (or preventing tremendous losses) for the citizens of Israel right away, as well as over the foreseeable future.”

Indeed, he wrote, in the coming two years new investments are expected to slow and many quality firms will need to shut down, laying off their employees. Germany and France have announced aid packages of 2 billion euros and 4 billion euros, respectively, for startups, he noted.

“Israeli companies, if not helped, will be at a great disadvantage and may lose important markets once things calm down,” he wrote. Israeli institutional investors, who have been largely absent from the Israeli tech scene due to the high risk and their lack of expertise in the sector, should be incentivized by the government to invest.

The heads of some VC firms, however, say that the industry does not need intervention, and market forces should be left alone. Government intervention will never be enough to satiate the constant hunger of startups, they say, and the money would be better spent on industries and sectors that have been hit hardest by the lockdowns caused by the pandemic.

In an opinion post published on the Calcalist financial website earlier this month, Adam Fisher, Rona Segev, Arnon Dinur and Michael Eisenberg, veterans of the nation’s VC industry, said Israeli startups should not be bailed out. 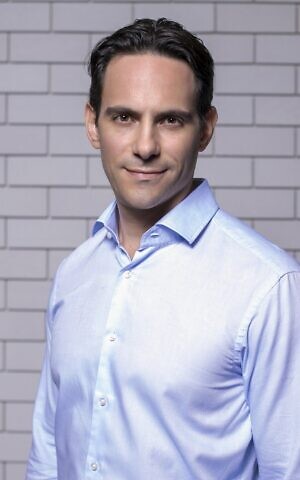 “Startups always need money, in fact it never ends,” Fisher, a partner at Bessemer Venture Partners, a global venture fund, said in a phone interview with The Times of Israel.

Fisher has managed Bessemer’s Israel office since 2007, and has invested in more than 30 local startups, including Wix, Fiverr and Habana Labs.

The tech industry, Fisher said, has continued to work amid the crisis. “High tech continues, it works from home, they sell online anyway. They sell software. They deliver online. They can do the work and continue to pay the rent.”

The key argument that people are making for supporting the startups, he said, is that they are worried that the number of very early stage startups is going to fall because investors will be tighter with their money, and that would be bad in the long term for the Israeli tech scene, he said.

“We just don’t agree with that,” Fisher said. “We don’t think that the number of startups is anything but a vanity metric.”

The number of successful startups is completely “unrelated” to the number of companies that are actually out there, he said.

Companies that have strong technologies will be able to get funding, irrespective of government loans, he said, even though investors will be certainly more discerning with the funds they dole out in light of the crisis.

“You may see a statistical blip that there were no deals signed March or April, or less were signed, which is entirely possible, but I think to run around saying that all of Israeli high tech is in danger because the world is now entering a recession, that is kind of not fair,” Fisher said.

“It is an incorrect policy to say capitalism is just for success, and when there is trouble socialism comes in and saves everyone,” Fisher added. “It just doesn’t make sense, and we think that it is a dangerous way of thinking about things.” 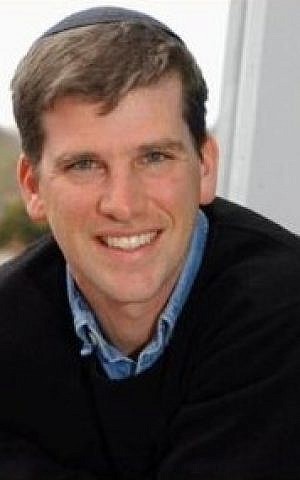 Investment in Israeli tech firms has “only gone up” over the last 10-20 years, said Eisenberg, the founder of Israel’s Aleph VC. “We think there are other parts of the economy that needs it more.”

“Free handouts to startups and venture capitalists is not a very good use of taxpayer money,” he added in a phone interview with The Times of Israel. “The sector has a lot of investment dollars in it, and we need to raise the productivity of other sectors that are hurting more.”

Any loans the government can give startups, explained Segev, the founder and managing partner of VC fund TLV Partners, will be a drop in the ocean and won’t have a significant impact on the industry.

Rather than channeling loans to the industry, the government can help the tech industry by investing more funds in basic tech research, and in training human capital, which the industry is starved of, Eisenberg and Fisher said.

More industries and households should be made part of the digital economy, they added. The government should create a digitalization fund to help non-tech businesses move online and sell their products globally, Fisher said.

“The coronavirus has accelerated a lot of digitization of the economy — and given us a portal into what the future might look like. It is important to rebuild and restructure our economy around the future rather than the past,” Eisenberg said.