Israel’s biggest hospital, Sheba Medical Center in Ramat Gan, is using software developed by facial recognition startup AnyVision to “nudge” its visitors to wear masks and to wear them correctly.

The software, deployed at the hospital, uses security cameras already deployed at the premises. AnyVision’s system detects visitors who are not wearing a mask, or wearing them imperfectly, and gives feedback on screens with messages like: “No mask kills my vibe” — or “Ooh, I like your style” if the person is wearing a mask correctly.

The idea is based on behavioral economics, in which “nudges” as opposed to hard enforcement are important tools that can be used to bring about changes in attitude and behavior. AnyVision’s system does not identify anyone by name, nor report them to a control center. It simply alerts the visitors to the fact that they are not wearing masks in a place where they are required to, in a manner similar to speed cameras that return negative feedback to drivers who exceed the speed limit.

“In a playful manner we increase awareness regarding masks,” said Alex Zilberman, the chief operating officer at AnyVision, in a phone interview.

The screens calling attention to the person not wearing a mask creates social pressure, he explained, and increases other visitors’ sense of legitimacy in asking that person to don the face gear as required.

The nudging software is garnering interest from other entities, such as those that operate airports, public transportation, and public buildings, he said.

The mask “nudging” mechanism is a relatively simple feature of a much broader and more sophisticated AnyVision system that has been operating in Sheba since the start of the pandemic to help conduct epidemiological investigations among the hospital staff. If a staff member is found to be ill with COVID-19, the system scans the hospital’s security cameras’ video footage to locate people who were in contact with that staffer for more than 15 minutes without a mask.

“We can see all the people they were in touch with,” said Zilberman. Hospital staff had to give permission for their identity to be used, and the system would not be able to identify a casual visitor, he stressed.

The startup developed this operational solution quickly at the request of the Health Ministry, and it has now been sold to other hospitals in Israel and logistics warehouses in the US, Zilberman said. 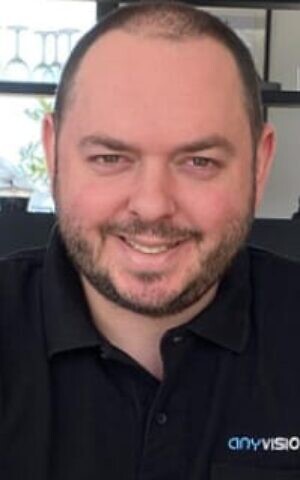 “We taught the algorithms to identify a person through the features that are still visible,” he explained, including the eyes, forehead and the bridge above the nose. If a person is wearing sun glasses and a mask, for example, recognition won’t be possible. But with a mask and regular glasses, the algorithm is able to recognize the person with 99% accuracy, as long as at least half of the face is in the clear, Zilberman said.

AnyVision was recently accused by human rights groups of providing Israel’s military with tools for mass surveillance in the Palestinian territories. Microsoft, an investor, in March divested its holdings in AnyVision even though the tech giant said it couldn’t substantiate claims that the startup’s technology is used unethically.

Facial recognition technologies in general have also recently witnessed a global backlash due to a bias found to be intrinsic in some of the algorithms that power these technologies, making them unable to correctly identify people of color.

Zilberman said that AnyVision’s product has been built specifically with non-bias in mind, he said. “Unbias is in our DNA,” he said. “We have 200 workers from different countries, from the UK, India, US and Europe” who work on the algorithms and make sure the end product is able to accurately identify people of all colors.

AnyVision has also developed a touchless access control solution to open guarded points of entry for authorized people. This technology, currently sold to large corporations globally, will help companies get their workers back to their offices in a safer and touchless manner, without them having to press buttons or scan cards for identification as the pandemic continues to wreak havoc worldwide, Zilberman said.

This touchless technology is already used by football stadiums and sports halls in the US, as well as offices of corporations globally, he said.

AnyVision, founded in 2015 by Eylon Etshtein and Prof. Neil Roberston, has raised $74 million by investors including Robert Bosch Venture Capital, Qualcomm Ventures and Lightspeed Ventures, according to the database of Start-Up Nation Central, which tracks the industry.