Fiverr International Ltd., an online marketplace for freelancers, will run its first Super Bowl ad during the event on February 7, the company said, joining other Israeli firms like Wix and SodaStream that have in past touted their wares on the National Football League’s annual championship game in the US .

The Super Bowl LV ad will be an evolution of the company’s recently launched campaign, “It Starts Here,” which went live in September 2020 and focused on small businesses that have undertaken a digital transformation in the past year as they addressed the coronavirus pandemic with support from freelancers on Fiverr, the company said in a statement.

“It doesn’t get any bigger than the Super Bowl from a branding and marketing perspective,” said Gali Arnon, chief marketing officer at Fiverr. “We believe this is a major opportunity for us to introduce the world to Fiverr in a unique and creative way. The spot will get to the very heart of how Fiverr supports businesses around the world. We can’t wait for everyone to see what we’ve created.”

The Tel Aviv-based firm was founded in 2010 by Shai Wininger and Micha Kaufman. It connects businesses with freelancers offering digital services, such as copyediting or website consulting. 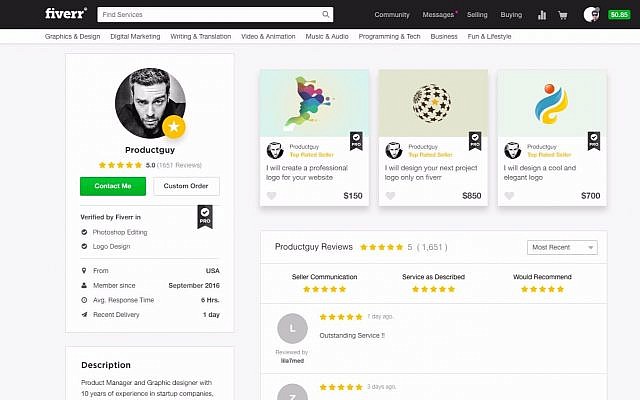 An example of a profile page on Fiverr (Courtesy)

The company went public on the New York Stock Exchange in June 2019 and has reached a market cap of a little over $8.96 billion, after surging almost 900 percent in the past 12 months to $253.86 at its close on Tuesday. On Tuesday, Citigroup set a new price target for the security at $270 a share.

In the twelve months ended September 30, 2020, over 3 million customers bought a wide range of services from freelancers across more than 160 countries, compared to 2.3 million as of September 2019, Fiverr said in the statement. Revenue in the third quarter of 2020 jumped to $52.3 million, an increase of 88% year over year, the company said in its third quarter financial results.

Fiverr’s Super Bowl ad is expected to run during the third quarter of Super Bowl LV, the statement added.