Once upon a time, the upmarket restaurants of chef Avi Conforti would be packed with people clinching deals over crispy Chinese chicken or clinking wine glasses to celebrate a wedding anniversary. That was pre-coronavirus.

Nowadays the kitchen fires are off and the aromas are gone, Conforti, a self-taught chef, said in an interview with The Times of Israel. “We went from 100 percent to zero, in one day.”

Amid the havoc caused by the pandemic, with businesses shut down for almost two months and citizens hunkering down at home to halt the spread of the virus, Israeli businesses, big and small, are decrying a lack of economic vision and leadership and a “stingy” aid package proposal that won’t help them survive the crisis.

A NIS 80 billion ($22.6 billion) aid package announced in March is much smaller than that provided by other nations, and has failed to reach those in need, businesses say, with promises of quick relief unfulfilled. 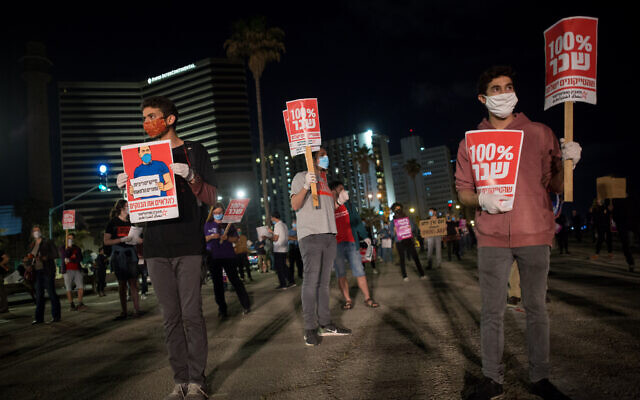 Self-employed, small business owners and activists participate in a rally calling for financial support from the Israeli government in Tel Aviv, May 2, 2020. (Miriam Alster/Flash90)

Israeli restaurants, bars and stores meanwhile are gearing up for what they perceive as the real battle that lies ahead.

Even when restrictions are finally lifted for restaurant and bars, feared to be a hotbed for a renewed round of viral infections, these will likely have to comply with stringent rules of separating diners and lowering the amount of people that can be hosted in their venues.

In normal times, Israelis spend about NIS 20 billion ($5.7 billion) a year on restaurants and cafés. Many of these restaurants, particularly in Tel Aviv, are small, family-run businesses. 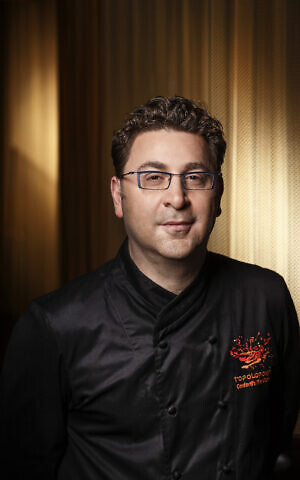 Before the virus struck, the restaurant fed some 600 diners a day and prepared 100-150 home deliveries. It worked seven days a week and employed close to 120 workers, among which specialist Asian chefs were flown in from abroad.

The even more upscale seven-year old Topolopompo, Conforti’s Asian grill restaurant, used to have some 400 diners daily and made 100 deliveries a day. The venue employed some 95 workers, with cooks dishing out beef and beat sashimi, corn dumplings with roasted mushrooms and whipped Chinese pea sauce, and spring chickens with shrimp ragout, toasted peanuts with tamarind and chili.

Since restaurants were ordered closed in March – in a bid to stave off the infection of the virus – Conforti, who fuses his Jewish, Bulgarian and Italian backgrounds into his Asian dishes, has put his workers on furlough, but has had to continue to pay the salaries and apartment rents of the specialist cooks he flew in from overseas.

Only Zozobra continued to offer delivery services, while the other two restaurants had to completely shut down, he said, because it was not financially feasible to keep them open just for deliveries. 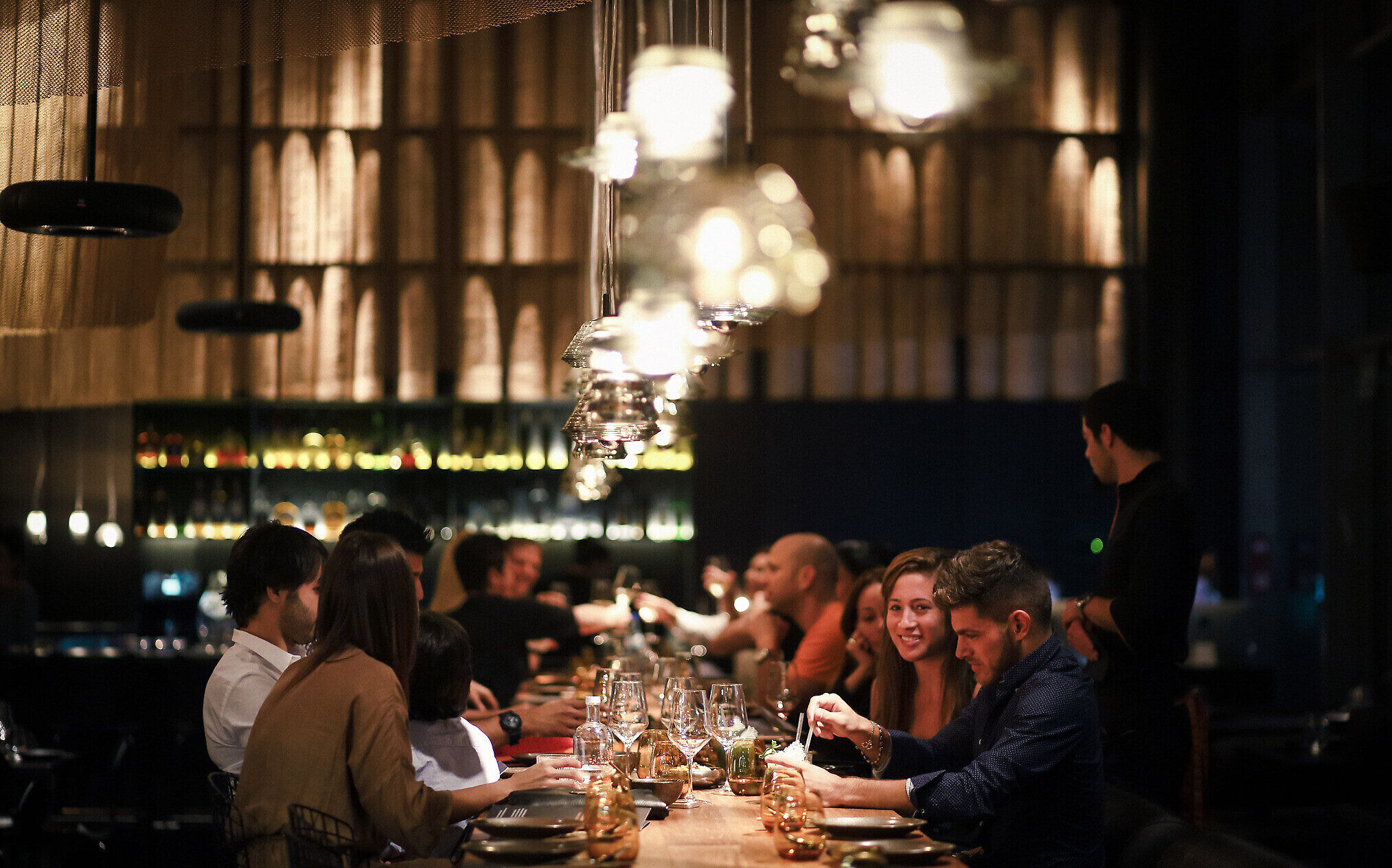 Diners at chef Avi Conforti’s Topolopompo Asian grill restaurant in Tel Aviv before the start of the coronavirus pandemic. (Courtesy)

Conforti has asked for a bank loan backed by government guarantees to help him get over the crisis, but was turned down, he said. “They told us we are a risky business in this period.” At the time of the interview, he had not yet received the promised rebate on municipal taxes.

“There is big gap between what the government promises and what happens on the ground,” he said. “We have misinformation, disinformation – and nothing has happened. There is no one to talk to.” Some 80%-90% of the turnover of restaurants generally goes to cover expenses, he noted.

There is confusion as to when restaurants will be allowed to open, with some ministries and municipalities indicating later in May, while others point to June. Also, if the guidelines for opening will be too stringent, like limiting the number of diners to just very few, Conforti said he may be unable to reopen. 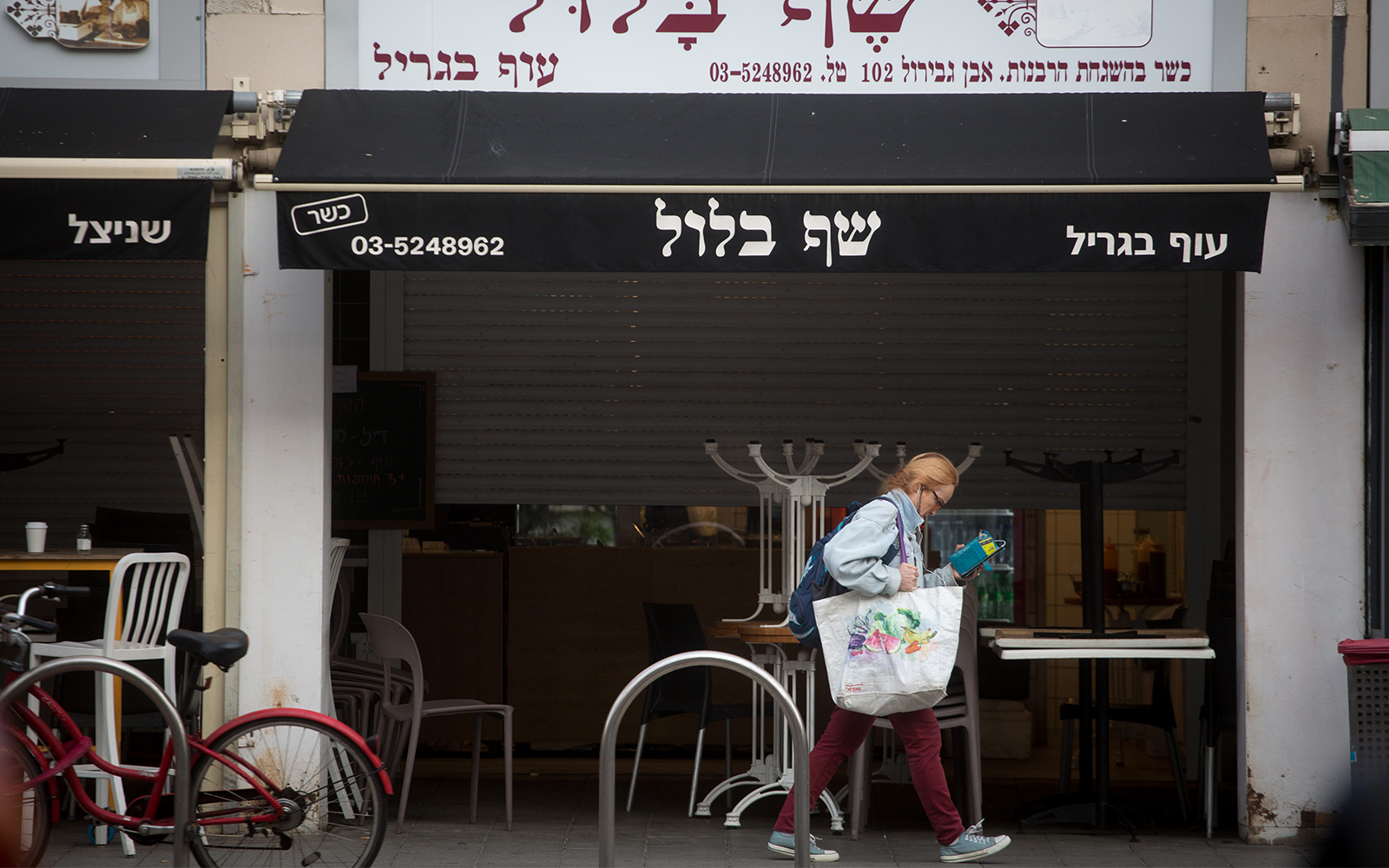 As he waits, however, he is making plans. Zepra’s space will be split in half. One part will host the original Zepra restaurant and seat up to 100 people and do deliveries. The second half will become a new concept take-away business called ZepraLex that will offer a different Asian menu, catering just to deliveries and take-away. The Lex suffix, he explained, is a play of words recalling Cipralex, the Israeli brand name for anti-depression and anti-anxiety tablets. “It’s what we take to make us feel better,” he said wryly.

Topolopompo is expected to reopen as is, he said, reasonable conditions allowing. “We may put tables outside both for Zepra and Topolopompo,” he added. 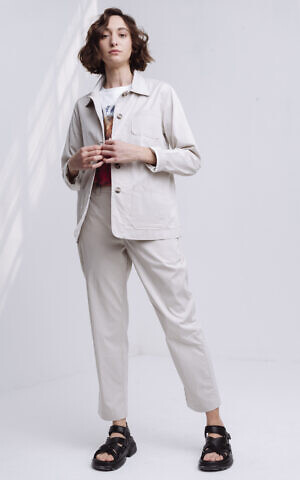 It’s not just the restaurants that are suffering. Although clothes stores are starting to reopen, they are re-employing just a small percentage of their original workforce, and are convinced that things will not be the same as before the pandemic hit.

Comme Il Faut, the upmarket Israeli fashion store for women, for example, has shut down three of its eight stores due to the crisis.

The stores that it closed were in the upscale Ramat Aviv Mall, in the trendy Shabazi Street, in the artist neighborhood of Neve Tzedek in the south of Tel Aviv, and in Ra’anana, said Sybil Goldfainer – owner of the chain that employed 30 workers, including in-house designers and store managers, pre-coronavirus. She said she has re-employed just 12 of her original workers for her shops in the Tel Aviv Port, Rabin Square in Tel Aviv, in Rechovot and in Ramat Hasharon.

“Our stores were closed for almost two months and all the goods were in the stores but there were no buyers. Suppliers needed to be paid, even if the goods were not sold,” Goldfainer lamented.

“We needed to make difficult decisions – we had to cut drastically to be able to survive what is coming,” she said. “It is not clear at what rate clients will be back in our stores. It is clear that there are no tourists, at all. So, we have to make maximum cuts to survive this period, if we can at all. I don’t know.” 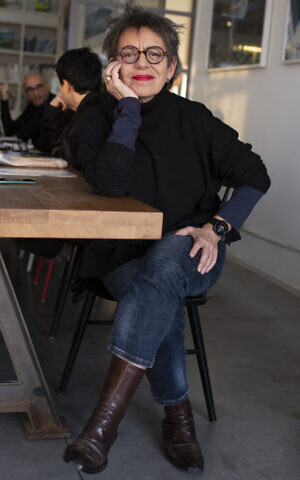 Online sales of the chain picked up during the lockdown, she said, but they were not enough to cover the costs of shuttered stores.

The uncertainty factor is huge, she said, making it very difficult to manage a business. “We don’t know if people will come back to buy.”

Although Goldfainer is eligible to get a government grant, she doesn’t know yet how much she will get and when.

“If the government was less stingy, and was more generous, like other countries, then it would have helped,” she said. “The message to the public should be that it is important to buy locally manufactured items …to support local businesses. If we can create such a kind of awareness, then it could help a lot.”

Tel Aviv’s trendy nightlife spots are also hurting, perhaps more than others, as bars — unlike restaurants — don’t even have the deliveries option.

Bicicletta, a Tapas bar and restaurant with a patio garden with a fun Mediterranean vibe on the busy Nahalat Binyamin Street, close to the Tel Aviv’s Carmel market, caters to regulars and tourists who could be found doing shots of vodka and tequila on weeknights and weekends, while snacking on its famous homemade aubergine fries, cured fish bruschetta, lachmajun (ground beef pizza) and smoked turkey sandwiches. 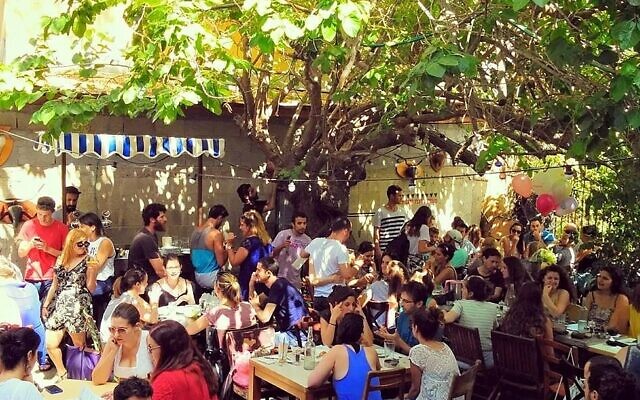 Bicicletta, a Tapas bar and restaurant with a patio garden with a fun Mediterranean vibe in the busy Nahalat Binyamin Street, close to the Tel Aviv’s Carmel market (Shani Marks Wazana)

Now, however, the chairs are stacked and the place is quiet, except for noises from the street outside.

“It is very sad and hard to see it that way,” said 33-year old Shani Marks Wazana, one of the three owners of the restaurant which opened seven years ago.

On March 6 the bar still had a Purim party, with regulars attending in fancy dress. But then on March 15 it closed its doors, as regulations calling for social distancing ordered restaurants and bars and other social venues shut. 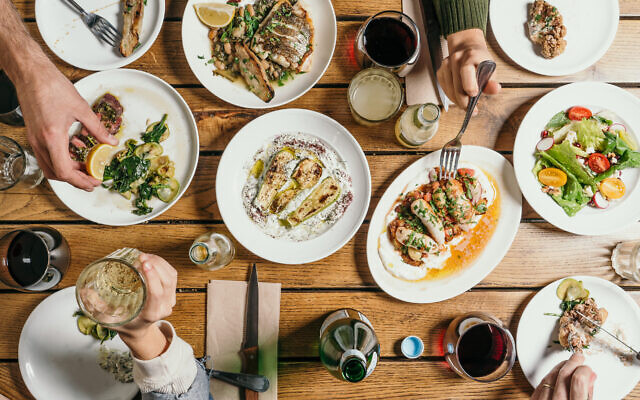 Things started to get harder already in February, said Marks Wazana, as the inflow of tourists slowed down. Then, in the first two weeks of March, until the bar was shut down, sales dropped by more than 50 percent. Now, all of Bicicletta’s 70 workers are on unpaid leave, and Marks Wazana has no idea when she will be allowed to reopen. 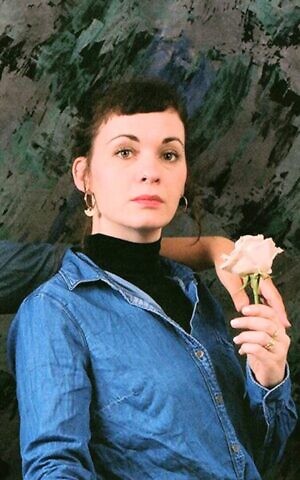 Shani Marks Wazana, one of the three owners of the Bicicletta bar in Tel Aviv (Sapir Cosa)

“They say May 17, then maybe May 31 or June 14 – nobody is giving answers,” she said. “It feels like they put the restaurants and bars at the very least of everybody’s problems, without even thinking about the fact that we employ and support 70 families.”

Marks Wazana is adamant the bar will reopen. She and her two partners are in the process of asking for a bank loan and hoping to get a government grant.

She believes that when the bar does reopen, however, it will be with a lower number of workers. “We are almost absolutely sure that less people will come, so we won’t be able to employ the same amount of people,” she said. “We are a tourist venue and there are no tourists,” and that automatically means less people will come visit the bar.

She added: “I don’t think that people who have not worked for two or three months will hurry and go out every evening. We will take it day by day. We really don’t know at the moment how to prepare for the future. It is very hard to know.”

Similarly, the Shpagat bar in Tel Aviv, also on Nahalat Binyamin Street, perhaps the oldest gay bar in the city, is completely shuttered.

Pre-coronavirus, the nine-year-old bar catered mainly to gay community members but not only. It is known to locals and tourists for its lively atmosphere, tasty bar food of salads and pizzas and toasts. Now the place is deserted, with the chairs stacked and locked, and the owners coming every now and then to check up on things.

“We hope to open at the end of May — maybe even next week, but we are waiting for official instructions,” said Yael Gal, who set up the bar with partners. 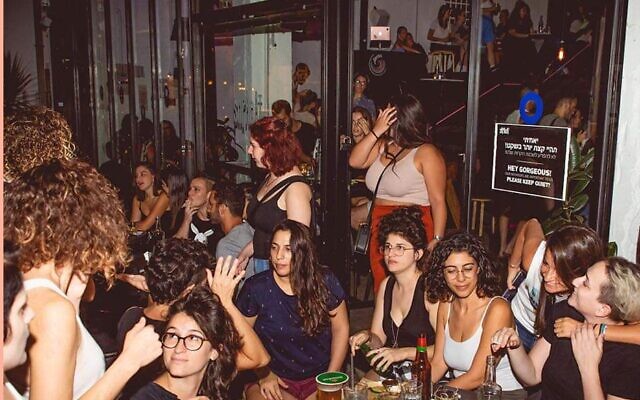 The Shpagat bar in Tel Aviv, on Nahalat Binyamin Street, is one of the oldest gay bars in the city (Courtesy)

The crisis significantly damaged the bar’s business, she said. “In one day we went from 100% to zero.” The business has furloughed all of its 20 employees and tried to cut costs as much as possible, cancelling subscriptions and asking for a rent rebate, which they got.

Gal is now waiting for the bank loan which they were promised to get. “We are a stable business that has been working for many years,” and that is probably why the bar was approved for the loan, unlike many others in the business who were turned down, she said.

But, she said, there is huge uncertainty for when the business will reopen. “We really don’t know what will be, but we understand there will be some drop in sales as tourists won’t be back so fast, and locals struggle with unemployment.”

Even so, regulars of the bar are in the age group that are less afraid of being infected, and unlike restaurants, bar fare does not need to be expensive. “So, let’s hope for the best.”