An Israeli startup, Mine, that developed software that allow consumers to control how their data is used has received an investment from Google’s artificial-intelligence venture fund.

The Tel Aviv startup, founded in 2018 by Gal Ringel, Kobi Nissan and Gal Golan, said it has raised $9.5 million in a Series A funding round led by Google’s Gradient Ventures, with the participation of e.ventures, MassMutual Ventures, and existing investors Battery Ventures and Saban Ventures. This is the first time Google’s Gradient is investing in Israeli entrepreneurs and the Israeli ecosystem, Gradient’s general partner Darian Shirazi said in a statement.

The Israeli startup also said that it has started marketing its technology to consumers in the US after launching it at the start of this year in Europe, where stringent privacy rules called GDPR have come into force, requiring firms to delete all customer information from their databases if requested.

The firm’s technology aims to help consumers enforce their “right to be forgotten” on the internet. The premise behind the technology is that there are always risks associated with using the internet, and data breaches are inevitable. Still, most people will continue to use the internet even at the cost of exposing personal data such as identification and credit details. 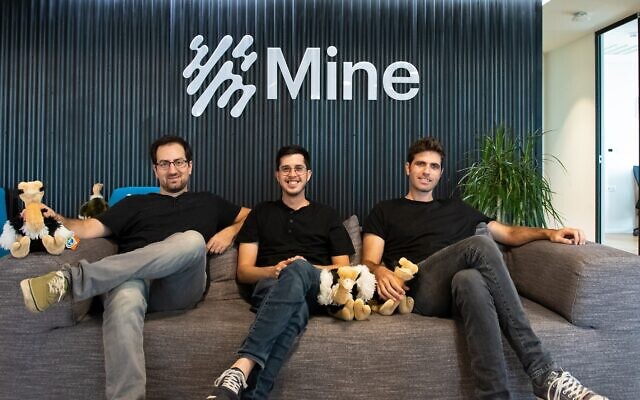 The Mine founders (Courtesy)

“We have developed a smart data assistant,” said Ringel in a phone interview. Refraining from sharing private data is not feasible, he said. “The solution is to manage your data and your risk on an ongoing basis. This will allow you to enjoy the internet without changing your habits.”

With the growth of social networks and personal data collection worldwide, privacy has become a concern, with 87% of Americans now viewing data privacy as a human right. Despite this concern, on average, 350 companies (for Israeli users, about 450 companies) hold a given consumer’s personal data such as their identity and financial information, Mine said in the statement.

People have no clue which companies hold their data, what they do with it and whom to approach to make sure that data is deleted. Eighty percent of the personal data that has been shared is from one-time, often forgotten digital transactions, explained Ringel, where the data could stay forever, keeping users at constant risk of data breaches and identity theft by hackers.

COVID-19 has made this problem even more acute, Ringel said. Since the outbreak, “our data exposure has grown by 55%, because the entire offline suddenly went online,” with more shopping being done via the internet due to lockdowns. “This means more personal data has been given to more companies.”

“What we do is data detox,” Ringel said. “We put you in the drivers’ seat to control and reduce the amount of your personal data that is out there.”

Mine has created what it says are “easy-to-use tools” to help consumers track who has their data,  how these companies are using their data, and how much risk is associated with these entities. Mine also offers the users the option of submitting a deletion request — The Right-To-Be-Forgotten — for services they no longer use.

Following the launch of its services in Europe earlier this year, the startup said that more than 100,000 users have used Mine to reduce their digital footprint, by sending more than 1.3 million data reclaim requests to over 150,000 businesses worldwide. 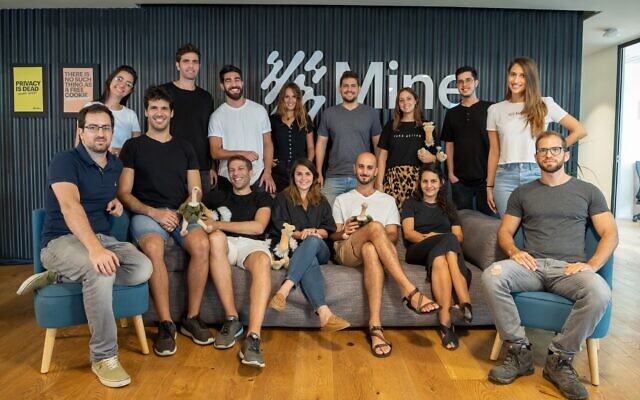 The Mine team (Courtesy)

To use Mine’s services, users need to give the Israeli startup access to their email.

That’s because most internet transactions are confirmed by email, explained Ringel.

“Emails give us access to 90% of the companies with the users’ data,” Ringel said. The firm is planning to develop software that can scour apps like WhatsApp or Telegram for similar interactions.

Mine’s “non-intrusive” machine learning technology thus identifies companies that are most likely to have collected the user’s personal data, based on the subject lines in their inbox only, Ringel said, without reading or collecting the body of the emails.

Mine is able to identify dozens of different types of data interactions across 10 languages. The AI-based software also cross-checks privacy policies of the various firms, to identify the type of data that was collected, and whether they are selling or sharing it with third parties.

Mine then maps out the data for the users, listing the companies that have their data and calculating an individual risk score for every user. With Mine, consumers on average reduced their digital footprint by 40%, the company said.

David Hoffman, chief privacy officer at Intel and a global privacy expert, has joined Mine’s advisory board to make sure the company’s privacy policies are in line with GDPR and other regulations, said Ringel.

The partnership with Mine will give “consumers visibility and choice over their personal online data,” said Darian Shirazi, general partner at Gradient Ventures. “Mine allows the average consumer to access and control over their personal data, and as a result, allows companies to maintain a higher standard when it comes to responsible data collection and security. Many companies promise users they can trust their standards and Mine is the consumer check on that anticipated balance between custodians and providers of data.”

The investment round will allow Mine to further develop its software and build added services, the company said.