Moshe Somech, a 54-year old owner of a car repair garage in Bnei Brak, is baffled and upset.

As the coronavirus struck and Israel went into lockdown in March, he had two options: continue working, as garages were designated an essential service and thus were allowed to remain open, or put all of his workers on unpaid leave and let the government pick up the lion’s share of the tab for their salaries.

Because it was just before the Jewish festival of Passover and because he views his workers as part of his family — they eat, work, bicker and enjoy each other’s company — he decided on the former option.

“I was raised with the value that it is your duty to work and do your best to keep the business running,” said Somech, a second-generation manager of his 55-year-old family business. So he kept his business open. “I didn’t trust the finance minister when he said the workers would continue to get their salaries, and I was afraid that if I let my workers go it would be hard to get them back. We are always short of well-trained mechanics.” 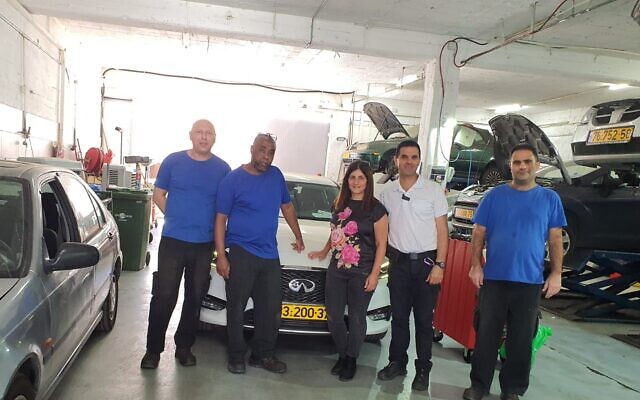 Moshe Somech, in the white shirt, with his workers at his car repair shop in Bnei Brak, Israel, June 14, 2020 (Courtesy)

He also didn’t want his workers to suffer the stress of being jobless, he said.

To make sure his customers knew he was open, he and his assistant spent hours every evening calling them to say they could have their cars serviced and washed and ready to go when needed. Somech even initiated a pickup and delivery service, so car-owners would not have to go farther than lockdown rules permitted. “We went to pick up the cars so we could survive. We were in continuous stress, hour after hour, to make sure work continued.”

“We went against the flow,” Somech said, even as the large car dealerships and bigger garages decided to shut down and have their workers collect unemployment benefits.

But instead of being rewarded for his efforts, Somech is now paying a heavy price: He will not be eligible for money the government is planning to hand out to businesses for each new worker they employ, or rehire from furlough, over a period of four months.

“I don’t need people to applaud for me,” Somech said. “But it would be nice to get some positive feedback. It is not fair. I am second generation in the business, and we all did the army and all paid taxes. This is a one-of-a-kind crisis. If we don’t get help now, what is left? Why do they make things so hard? What would happen if they helped us out in our time of need?”

Even though he kept his business open, he said, his turnover has dropped.

“The business has not returned to what it was,” Somech said. People drove less under lockdown, so they needed less servicing, less inspecting and fewer repairs. During an economic crisis, “it is like a dentist,” he said. “If you don’t have the money and you don’t really have to go, you postpone.”

Getting people back to work

Somech’s story resonates with many in the economy, from small business owners to big ones, who say that solutions provided by the government to help them with the crisis are too little and too late. Israel could see a 50% jump in the number of businesses shutting down this year, to some 70,000, because of the coronavirus crisis, business data firm Dun & Bradstreet forecast in a report on the pandemic and its impact on the Israeli economy.

The Knesset is expected soon to pass a NIS 6 billion ($1.72 billion) Finance Ministry proposal aimed at getting people back to work, as unemployment has soared amid the spread of the coronavirus. In Israel, the virus has killed 302 people and more than 19,000 have been infected, and concerns are rising of the start of a second wave of the pandemic. 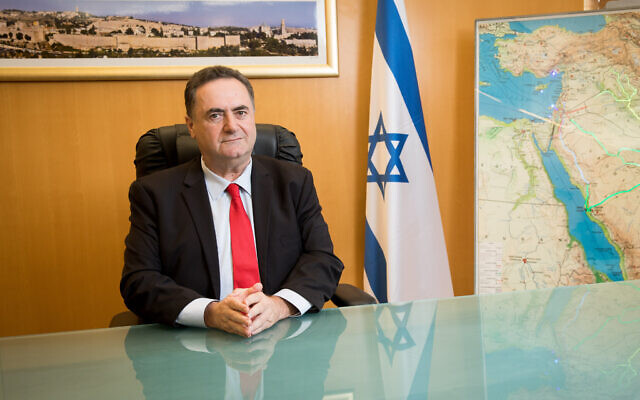 Earlier this month the Organization for Economic Cooperation and Development predicted “severe and long-lasting” economic damage, as hundreds of millions worldwide are out of work, with the youngest and the poorest hit the hardest. The international economic report forecast a global drop in economic output of 6 percent this year and a rise of 2.8% next year in a best-case scenario, if there is no second wave of infections.

The OECD report forecast that Israel’s economy would contract in 2020 by some 6.2%, in its single-hit scenario, and by 8.3% in a second-wave scenario, compared to last year.

Lockdown measures in Israel, which began in mid-March, brought the economy to an almost-total standstill. Unemployment figures jumped from a record low of under 4 percent at the beginning of March to some 28% in late April, as many businesses were forced to close their doors. The number of unemployed surpassed 1 million for the first time in Israel’s history. Eighty-five percent were put on unpaid leave (furloughed). 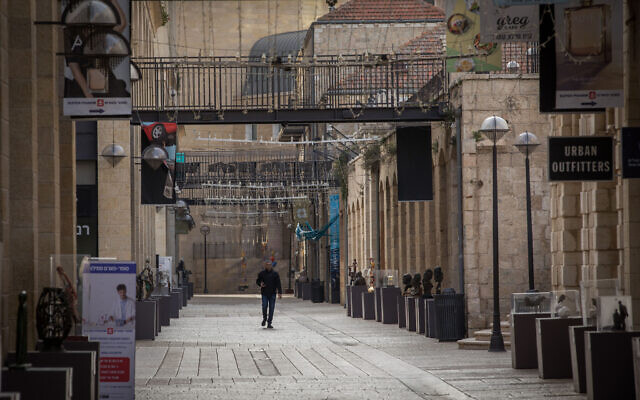 A man walks past closed stores in the empty Mamila Mall in Jerusalem, March 23, 2020. (Nati Shohat/Flash90)

This has made tackling unemployment one of the most urgent issues faced by the new government, as experts have warned that joblessness could become the Achilles’ heel of Israel’s economic recovery. Employers who put their workers on furlough are not hurrying to take them back, and the government’s NIS 6 billion plan aims to address that.

The plan will provide incentives over four months for businesses to hire workers who may have lost their jobs due to the lockdown. The program gives NIS 7,500 ($2,163) to businesses that employ unemployed or furloughed workers as of June 1; businesses that took on new or former employees as of May 1 will receive half that sum.

The funds will be distributed to businesses per worker they hire; it could be a former employee who was furloughed or a completely new worker, as long as they became unemployed on or after January 1, 2020, and were eligible for unemployment benefits. There is no limit on the number of workers businesses can hire to get the grant.

The plan covers part-time workers as well, with grants given for employees or working students earning as little as NIS 3,300, the ministry said in a statement in May.

The government will also allocate a further NIS 500 million for vocational training programs.

Announcing the plan in May, Finance Minister Israel Katz said the program was “simple and effective and aimed at getting over one million unemployed back to work as quickly as possible and getting the economy back to rapid growth.”

Yet critics say that the plan sends a bad message to businesses that didn’t furlough their workers, and if there is a second lockdown, they will have no incentive to hold on to their employees as they did in the first lockdown. Also, they say, the initiative favors big businesses over small and medium-sized ones, which need the money most.

The plan has created a “paradox,” said Roee Cohen, president of the Israel Federation of Small Business Organizations.

“The trust between the government and businesses has been hurt,” he said, with the message being that business owners shouldn’t make an effort to keep their workers employed if there is a second wave of the pandemic and further lockdowns. Rather, “it is worth their while to send them all home. So instead of there being one million unemployed people, this figure will balloon to two million. This is not logical.”

Lobby 99, a nonprofit organization that crowdfunds to lobby the government and the Knesset on the public’s behalf, says that the grant package helps bigger firms most, whereas the focus should be more on small and medium-sized businesses.

Figures compiled by the lobby group show that 37% of the funds would go to big businesses, which, however, account for just 11% of the furloughed or unemployed workers. Big businesses are defined as those that have 100 employees or more.

Small and medium-sized businesses are at higher risk of bankruptcy, whereas bigger businesses have the advantage of size, access to other funding sources and negotiating power, members of Lobby 99 wrote to the Knesset’s Finance Committee in a letter dated June 6.

“Big businesses don’t really need incentives to take back workers,” said Noa Zalsman, a public lobbyist at Lobby 99. “It is almost as if the grants plan has been packaged to go help these big chains and businesses.”

The lobbyists added that a cap of NIS 5 million should be placed on the amount of funds each business should get from the government.

Also, said the lobbyists, conditions should be put in place to make sure that businesses don’t fire the workers again after the four months of the plan are up and that the money is not used to fatten shareholders’ dividends or managers’ salaries.

In fact, they say, the government should give the grants only to businesses that will not pay out a dividend for the year nor raise salaries for managers for a specified period of time.

Otherwise, the money would be better spent elsewhere, to improve “education, health and welfare,” said Zalsman.

Meanwhile, Yaron Zelekha, Israel’s former accountant general and today the director of accountancy studies at the Ono Academic College, told The Times of Israel that no amount of money poured in by the government will be enough to fix the economy. What the Finance Ministry should do is to cut taxes and fight entrenched monopolies.

The government should cap prices of natural gas, for example, he said, which will help bring down prices of food at restaurants and hotels, as it will lower manufacturing costs.

Zelekha also called for immediately lowering company taxes, which will benefit small businesses, and for encouraging competition and doing away with custom duties in sectors like food and cosmetics, which are currently dominated by just a select few business players. 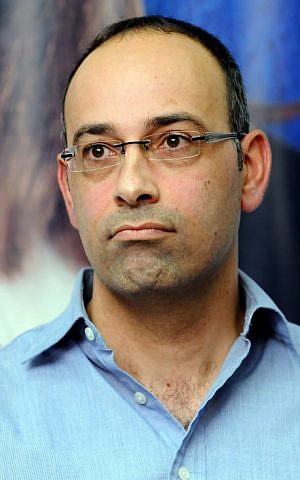 It is this centralized control, found throughout the Israeli economy, that stifles competition, ensures that prices remain high, and helps to explain why the Jewish state was ranked earlier this year, as having the eighth highest cost of living in the world. Nine years after massive social protests against that cost of living, Israel still has more monopolies than the US or any European country.

“It is easy to distribute money,” Zelekha said. “It is more difficult to fight the tycoons who own monopolies.”

The Finance Ministry, meanwhile, believes its grants will be enough to help bring jobs to workers.

People who worked throughout the lockdown, like the auto mechanic Somech, are eligible for a program of grants totaling NIS 5.2 billion that the government has started distributing to pay for businesses’ fixed costs incurred during the crisis. This applies to businesses that have seen a 25% drop in turnover due to the coronavirus. Those who worked and continued to pay salaries are thus eligible for higher grants because their fixed costs would be higher.

Somech, who got a government-backed loan for NIS 150,000 out of the NIS 500,000 he requested, said he has seen no other money from the government.

“All I get when I apply for grants online is a message that I am ‘not eligible’ with three exclamation marks behind it,” he said. Of the fixed-costs grants, he said, he has not received any money at all, at least not yet.

“Let’s see when they will give that money out and how long it will take to get it.”