Letting robots and AI do much of the heavy lifting and keeping doctors and nurses safely away from an infectious patient with augmented reality goggles, an Israeli medical center at the forefront of the COVID-19 fight unveiled what it said was the “hospital room of the future” Tuesday.

Sheba Medical Center said it was not waiting for the future to integrate the new technologies, though, as it sought to prepare for a feared second wave of the coronavirus even as the pandemic has taken an increasingly minor role in Israeli public life.

“The technologies we’re introducing, and have brought in recently, will give us an edge in our preparedness for a second wave,” predicted Eyal Zimlichman, Sheba’s chief medical officer.

He said that his hospital, just outside Tel Aviv, was the largest recipient of coronavirus cases in Israel to date, and is “very much more prepared” for a second wave than it was for the first wave.

Zimlichman spoke to The Times of Israel after an hour-long online event on Tuesday, during which he commented on footage shot in a new room built in the Sheba-based Israel Center for Medical Simulation. The “room of the future” is a facility used for trying out new innovations used by teaching staff. It is a model for how staff hope that rooms across the campus will start to look as innovations are rolled out over the coming months.

The room includes more than a dozen technologies that were deployed in recent weeks or will be deployed soon in parts of the hospital, especially in the 450-bed coronavirus facility. Sheba has played a part in developing some of the innovations, but not all of them. 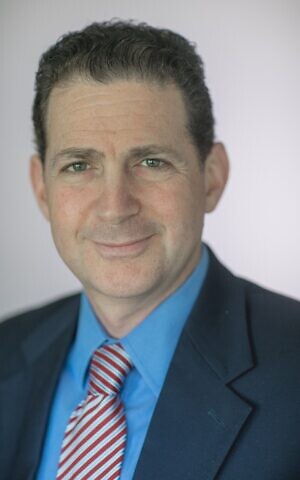 The hospital has long been working on boosting the role of technology in patient care but COVID-19 has been a major “accelerator” for digital health, said Zimlichman. He explained that the pandemic has forced staff to think creatively in order to care for the complex needs of patients while minimizing direct contact with them.

“Some of these solutions had already been tested at Sheba, but it was just COVID-19 that propelled us to push this to the front lines and get it to work,” Zimlichman said.

The webinar — titled HealthSpace 2030, because Sheba intended it to kickstart a conversation about what patent care will look like in a decade — showed footage of doctors treating an actor playing the part of hypothetical 40-year-old coronavirus patient Joel Cohen. A robot connected him for a video call with his wife, a sensor under his mattress monitored various stats, a nurse used virtual reality coaching to fix a ventilator, and artificial intelligence helped doctors catch a deterioration before it happened. 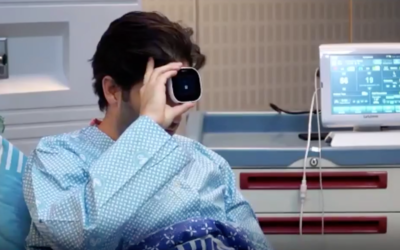 One feature of the new hospital room is a device that the patient operates to conduct tests based on the instructions of a doctor or nurse who talks to them via a screen. In the simulation, a doctor told the patient to attach a thermometer and other accessories to get a picture of his health.

For many conditions, doctors want technology to give early warning of deterioration, but this is particularly needed for the coronavirus, said Zimlichman. The disease can involve a sudden demise, and doctors are desperate to receive early warnings. “It has been critical for us to be able to monitor patients and see a few hours in advance when they are going to deteriorate,” he explained.

Doctors at Sheba already place sensors under mattresses in some wards to track heart-rate, respiratory rate and movement, artificial intelligence processes the data, and alerts doctors if patients look likely to take a turn for the worse. “It typically gives us a signal four to six hours before a deterioration,” said Zimlichman, adding that this is valuable time in the case of coronavirus patients.

Another alert system, still in development by Sheba and a private sector partner, is an app that monitors a patient’s voice when they talk on their cell phone. It can pick up changes in voice – or breathing – that can indicate a deterioration is likely, and alert the medical team if this is detected. 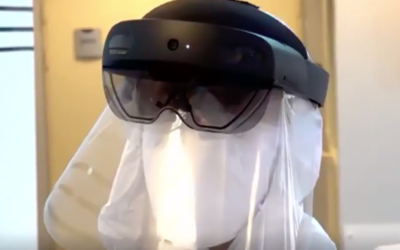 Zimlichman said that augmented reality has been in use throughout the pandemic and has proved helpful, as it is challenging to kit technicians in protective gear to carry out maintenance activities on virus wards.

Amitai Ziv, director of the Israel Center for Medical Simulation, said he was particularly pleased to see defense companies getting involved in healthcare. “We’re very very privileged by the fact that we found ourselves, so to speak, shifting the killing industry into the healing industry,” he said.

“Killing is not a nice word, defense is better, but a lot of those startups that we have seen, and more solid companies that are out there in the field of defense… moved and found themselves in the field of healing, and that’s something that made us all very proud.”