Israel is setting up a task force aimed at bringing a new level of accuracy to genome editing, in the hope it will pave the way to cures for various medical conditions.

The state-run Israel Innovation Authority (IIA) has allocated NIS 36 million ($10 million) for the country’s academic institutions and several companies to advance CRISPR, a technology for making edits to the genome.

The consortium, which will work on genome editing for humans, as well as agriculture and fish, will run for 18 months, after which funding may be renewed.

There is widespread excitement in scientific circles about genome editing, after CRISPR was administered, for the first time, inside a human body last month, in an attempt to treat genetic condition that causes blindness.

Genome editing, which involves making changes to DNA, normally to address a health problem, is thought to have potential for common conditions like cancer and blood disorders, but also for rare genetic illnesses for which medicines aren’t developed.

Genome editing is already used in agriculture and research, and it is widely hoped that successes with animals — like reducing the severity of genetic hearing loss in mice — will provide the knowledge that scientists need to advance human health. “Israel will be one of the leaders in the field,” IIA vice president Aviv Zeevi told The Times of Israel, saying this hope is driving the establishment of the new CRISPR-IL consortium. “We’ll have some of the most accurate tools.”

Zeevi, who heads IIA’s Technological Infrastructure Division, said that the new consortium will deploy artificial intelligence to try to overcome one of the major hurdles of genome editing — its accuracy levels.

“We need to be able to target the specific part of the genome we want to fix, and the difficulty is that accuracy of existing tools is low,” he said.

He stated that members of the consortium will research ways to boost accuracy by developing ways of guiding the tools that make genome edits — “tools that are like scissors which cut the specific part of the sequence and replace it” — to the precise place where they are needed.

Zeevi said: “We will train algorithms to know where to perform the edit and get to a higher accuracy level. Right now, the success rate for genome edits is around 10% and we are hoping to get to 70% within three years.”

He said that the algorithms will both pinpoint the right targets for edits, and reduce risk of edits having unwelcome knock-on effects on other parts of the genome — a major concern that holds back human DNA editing.

To date, genome editing in humans has been limited, though there have been some successes. Last year, the University of Pennsylvania announced that it had conducted the first clinical trial to edit a cancer patient’s immune cells using CRISPR technology and then return the cells to the patient. It concluded that the method is safe and feasible. 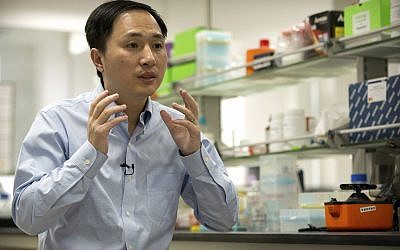 In this Oct. 10, 2018 photo, He Jiankui speaks during an interview at a laboratory in Shenzhen in southern China’s Guangdong province. (AP/Mark Schiefelbein)

More controversially, in 2018, Chinese researcher He Jiankui claimed to have produced the world’s first gene-edited babies. He was sentenced to three years in prison. Israel has strict laws governing scientific endeavors, and Zeevi said that no research involving humans will take place without approval by an ethical committee.

He admitted that Israel is taking a leap into the unknown. “Were taking a big risk here,” he said. “It’s not a very standard field in which we’re investing. We know we’re going into a field that’s very high risk, and we’re trying to create a new economic impact on the field. We’re trying to identify an interdisciplinary niche in which we’ll be able to lead.”

This consortium is part of the IIA’s Bio-convergence Initiative, which brings together engineering, AI, physics, computation, nanotechnology, material science and advanced genetic engineering to address needs in health and other industries, such as agriculture and energy.