Israel has significantly improved its internet quality but remains iffy on infrastructure, according to the annual Digital Quality of Life Index 2021, which ranked 110 countries worldwide on digital wellbeing based on factors such as internet affordability and quality, infrastructure, and digital government services.

The survey, compiled by the virtual private network provider Surfshark, was released last week with Israel ranking fourth overall, up four spots from the 2020 index, which examined 85 countries. Israel’s 2021 rating surpassed that of the US, which ranked fifth, Switzerland, 8th, and the UK, 10th.

Denmark took the top spot in the index, followed by South Korea and Finland. The bottom five countries were Ethiopia, Cambodia, Cameroon, Guatemala, and Angola.

The annual survey, now in its third year, evaluates countries based on a set of five “pillars” — internet affordability, internet quality, e-infrastructure, e-security, and e-government — and 14 indicators such as internet speed, GDP per capita, mobile internet price and broadband internet price. The study is based on open-source information provided by the United Nations, the World Bank, Freedom House, the International Communications Union, and other sources.

According to the 2021 survey, Israel dropped down from the top spot for internet affordability (mobile and broadband) last year to second place overall, but did rank first for broadband internet affordability. The index looked at the number of hours people had to work per month to afford the cheapest broadband internet package for this pillar. In Israel, it was only 19 minutes, four minutes less than 2020, whereas globally, the figure stood at around six hours of work. 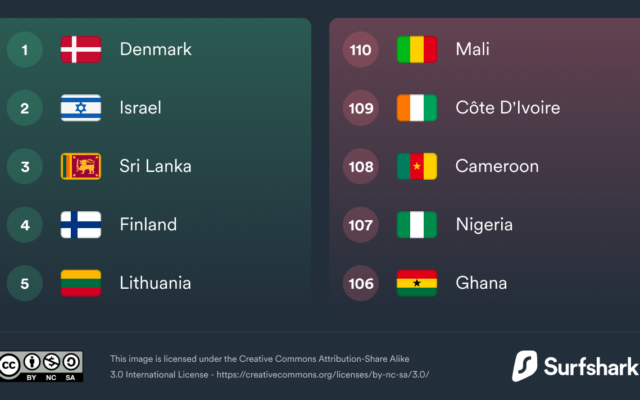 A graph showing the countries with the most and least affordable internet packages. (Surfshark, CC BY 3.0)

In e-government, which measures how advanced and digitized a country’s government services are, Israel came in 29th, well below the UK (third place), Estonia (eighth), France (14th), and Luxembourg (22nd). “Better e-government helps to minimize the bureaucracy, reduce corruption and increase the transparency of the public sector. It also improves the efficiency of public services and helps people save time, influencing the quality of their digital lives,” the organization explained in supporting materials.

The so-called Startup Nation, whose cybersecurity sector is one of the strongest in the world, also ranked 29th globally in e-security (electronic security), which examines a country’s preparedness to counter cybercrimes and its commitment to protecting online privacy. Greece ranked first for this pillar, according to the index, followed by the Czech Republic and Estonia. 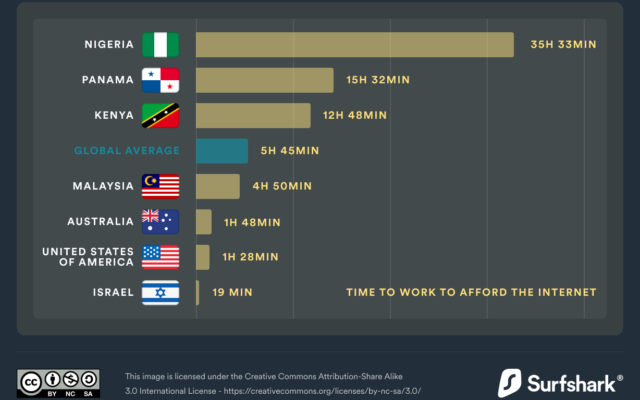 A graph showing the number of hours people have to work per month to afford the cheapest broadband internet package in different countries, according to the 2021 Digital Quality of Life Index. (Surfshark, CC BY 3.0)

Generally speaking, Israel has slow internet due to a lack of competition in the telecommunications market as well as derailed reforms that set the country back, The Times of Israel reported back in 2019.

According to the most recent report by M-Lab — a partnership between New America’s Open Technology Institute, Google Open Source Research, Princeton University’s Planet Lab and others — and compiled by Cable, Israel ranked 60th out of 221 countries for internet speed.

Bezeq and Hot have licenses to roll out fiber-optic networks, an ongoing project in recent years. Fiber-optic networks use light signals beamed along hollow cables rather than electricity along copper wires, as the current systems use. Fiber optics can offer download speeds of several gigabits per second, compared to current speeds, which are measured in tens of megabits per second.