Two years after unveiling, to much fanfare, a prototype for the first known all-electric airplane at the Paris Air Show in 2019, Israeli-American company Eviation Aircraft is preparing for the plane’s first test flight to usher in a “new age of aviation,” according to founder and CEO Omer Bar-Yohay.

The test flight for the aircraft, dubbed the Alice, was expected “before the end of the year” with the plane — now in its fifth iteration — in final assembly at Eviation headquarters in Arlington, Washington, just north of Seattle.

Bar-Yohay told The Times of Israel in a Zoom-facilitated interview from Arlington this month that the company was “excited” for the flight, which puts the Alice on a path toward approval by regulators and then, hopefully, service entry in 2024. “We are making three more planes for a total of four aircraft to accelerate certification over the next few years,” he said.

The Alice was originally conceived as a small, nine-passenger, fully electric commuter aircraft manned by a single pilot that would make regional trips as accessible as a train ride, but at a lower cost and with better service, according to the company. With a payload of 2,500 pounds (1.1 tons) and a range of 440 nautical miles (815 kilometers), the Alice would be available for passengers to book a ride by app for popular short-haul routes — say, San Jose to San Diego, London to Prague, and Paris to Toulouse. It’s a potential experience Bar-Yohay has coined an “Uber in the sky.”

The aircraft’s lithium-ion battery would require 30 minutes or less to charge per flight hour, Eviation says, as its mission is to make electric, zero-emission aviation a “competitive, sustainable answer to on-demand mobility.”

Bar-Yohay calls it a “new age of aviation” where “we are seeing a convergence of factors.”

“We have a product that is sustainable [the Alice is made of lightweight, composite materials], it is economically sustainable, as it is cheap to operate and maintain, and it is socially sustainable — this is a mode of transportation people want to use,” said Bar-Yohay. 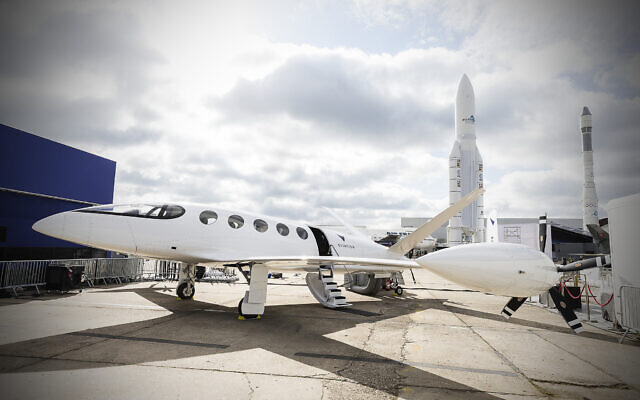 The all-electric Alice aircraft from Eviation revealed at the Paris Air Show in 2019. (Eviation Aircraft)

Electric engines and battery technologies are driving a “third age of aviation” where “we have a maturity of elements and advanced materials, the social will, and the financial capabilities,” said Bar-Yohay.

Eviation snagged its first client, Massachusetts-based regional airline Cape Air, in 2019 just as it unveiled its Alice prototype. Cape Air, which operates 95 fleets in some two dozen cities throughout the US and the Caribbean, placed an order for Alice aircraft in “the double digits,” Bar-Yohay said at the time, at a price tag of $4 million per plane. The company then announced that two well-known but not-yet-disclosed American companies had also placed orders for the Alice, which now topped 150.

A few months later, Singapore-based conglomerate Clermont Group announced that it had bought a 70 percent stake in Eviation for an undisclosed amount, acquiring the company and injecting fresh capital into its operations. Clermont Group also owns electric motor manufacturer MagniX, which provides Eviation with two Magni650 electric motors for the Alice.

Eviation has attracted its fair share of attention in recent years, nabbing a spot on TIME magazine’s list of 100 “best inventions” two years ago (alongside eight other Israeli-founded companies), and winning a “World-Changing Ideas” Award in 2018 by US business magazine Fast Company. 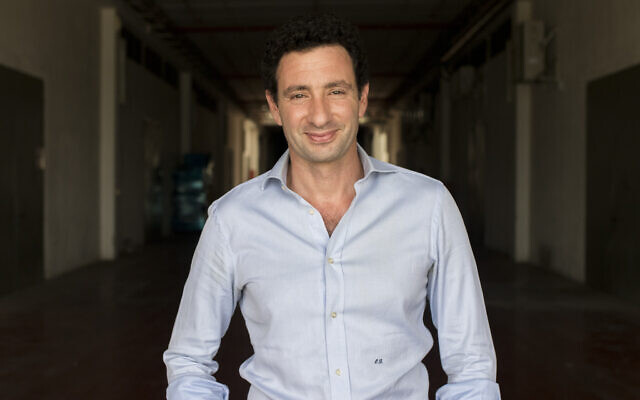 Last month, Eviation revealed that global logistics and international shipping giant DHLhad placed an order for 12 Alice aircraft in cargo configuration, the Alice eCargo, to set up an electric DHL Express network for “a pioneering step into a sustainable aviation future,” according to the company.

DHL announced in 2017 that it was embarking on an ambitious environmental protection plan to reduce all logistics-related emissions to zero by the year 2050.

“We firmly believe in a future with zero-emission logistics,” said John Pearson, CEO of DHL Express, in a statement accompanying the announcement. “We have found the perfect partner with Eviation as they share our purpose, and together we will take off into a new era of sustainable aviation.”

Travis Cobb, EVP Global Network Operations and Aviation for DHL Express, said that the Alice was “a fantastic sustainable solution for our global network” as the company looks to make “a substantial contribution in reducing our carbon footprint.”

The heart of the matter

Partnering with clients like DHL is a “huge deal” and a significant milestone for Eviation, Bar-Yohay said. The Alice’s cargo version naturally has some modifications — no seats, for example — but the specifications on payload and range remain the same.

“We have a credible operational solution for cargo operations; the Alice can work day in and day out and function as a workhorse,” he said, adding that the plane can be charged while loading and unloading for “maximum use” on short hauls. 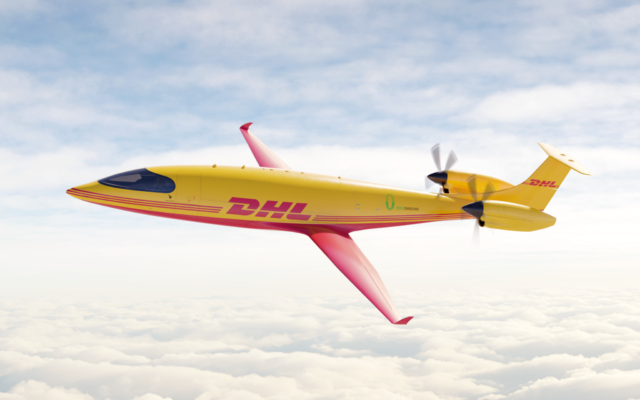 Eviation’s focus, however, is very much on its commuter solution, which Bar-Yohay said will make “a bigger dent” in the transportation industry and is “the heart of the product offering going forward.”

His vision is to introduce a cost-effective, environmentally conscious, and quicker way for people to travel between cities and major destinations, using airstrips as stations. The company says the Alice has low maintenance and operating costs and expects that the aircraft will reduce carrier costs by up to 70 percent.

A strong bonus, Bar-Yohay notes, is how much quieter electric planes are. 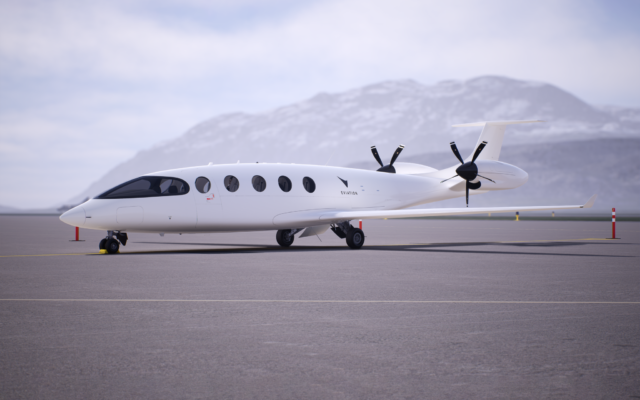 “Today, if you live by a small airport or airstrip, you get the noise and it hurts the value of your property. What if we could change this? Look at airstrips as a station [that is part of a network] or a hub, and not just an inconvenience,” he explained. “With thousands of airports per continent, we can tap into this [network].”

By the time the Alice planes go into service in 2024, pending all regulatory approval, “electric aircraft fleets will be much more common” because they don’t need as much infrastructure as electric cars, he said.

“For every flight, there is a flight plan; you know when the plane is taking off, when it’s supposed to land, which route it is taking — you know everything you need to know because it is a controlled environment,” he explained.

Once there are final approvals, “the rollout will be fairly rapid here in the US, and then globally.”

Eviation is set to announce two new clients for commuter operations by the end of the year, Bar-Yohay said, declining to specify.

He was emphasized that Eviation was a plane manufacturer and would not become a fleet operator or a logistics provider.

Seattle as a base

Bar-Yohay and his team set up shop in Arlington four years ago to tap into the local aviation talent pool and large-scale manufacturing capabilities in the Seattle area, where the Federal Aviation Administration maintains a major regional office. The agency, part of the US Department of Transportation, regulates all aspects of civil aviation in the country and licenses commercial operations.

Bar-Yohay said the area is an important hub for the aviation sector and serves as a base for major industry players like Boeing and Amazon, both founded in Seattle. Amazon Air, the e-commerce giant’s cargo airline, schedules flights from Seattle-Tacoma and is set to add Spokane, a city about 280 miles (450 km) east, as a destination as well.

“There is a lot of value in being part of this broad ecosystem,” he said.

At one point, Bar-Yohay walked a very short distance from his office to reveal a brightly lit hangar where a team of Eviation specialists was working in and around the Alice. “People tell me it’s like working at Google but with a plane in the backyard,” he joked. 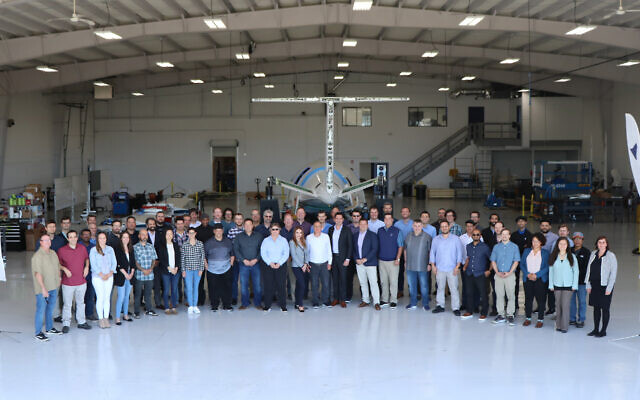 Bar-Yohay himself is a veteran of the aerospace and aircraft industries, having worked for 15 years in various leadership roles in Israel and Europe before going on to establish Eviation Aircraft in 2015 in Kadima, Israel.

Eviation still maintains its R&D operations in the city, close to Netanya. “It’s a very important part of the operation for us,” he said.

The whole team weighed in on the name for the aircraft, settling on Alice because it “begins with the first letter of the alphabet” and as a reference to the popular children’s tale “Alice in Wonderland.”

“The name encapsulates the inquisitive nature of this whole process” as well as the adventure, Bar-Yohay said.

The Alice is the first of a family of products for Eviation — but “all in due time,” he added.

The focus, for now, is getting the Alice certified and taking it to market successfully. “The next step is literally backing the plane out of the [hangar] doors, completing a low-speed taxi, then high-speed, and then flying.”