Israeli company ElectReon announced Tuesday that it has entered into a strategic memorandum of understanding with a large European infrastructure company, Eurovia, to promote and build wireless electric road systems in Germany, France and Belgium.

The Tel Aviv-Jaffa Municipality recently contracted with ElectReon to pilot a smart road that can recharge an electric bus as it drives along.

Eurovia is a road construction company operating under the French concessions and construction firm, Vinci S.A. The news came via a company notice to the Israel Stock Exchange.

ElectReon, based in the northern Israeli community of Beit Yannai, has already installed a 1.6 kilometer (1 mile) electric stretch used by a bus and a truck on the 4.1 kilometer (2.5 mile) route between the airport and town center of Visby on Gotland Island in Sweden.

At the end of this year, the company is set to install the first wireless electric road system in Germany, in Karlsruhe in the country’s southwest. 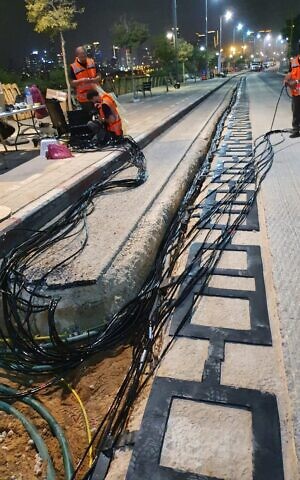 Laying underground cables to turn a stretch of existing road into one that recharges electric vehicles as they drive along. (Tel Aviv-Jaffa Municipality)

Aimed at reducing air pollution, the electric road does away with the need for recharging stations. According to ElectReon’s website, a system of copper coils is laid beneath the asphalt to transfer energy from the electricity grid to the road and to manage communication with approaching vehicles. Receivers are installed on the floor of the vehicles to transmit the energy directly to the engine and the battery while the vehicles are on the go. Communication with all management units and all registered vehicles is via cloud technology.

The system allows for smaller batteries on electric buses, releasing more room for passengers, utilizes existing roads, and saves time because vehicles do not have to stop to charge or refuel.

The Tel Aviv-Jaffa Municipality last month announced a pilot project with ElectReon that will see a 600 meter (just under 2,000 foot) recharging stretch built under the two-kilometer (1.25 mile) bus route between the Tel Aviv University Railway Station and the Klatzkin Terminal in Ramat Aviv. The vehicle to be charged will be an electric bus with a special battery, the city said.

If the Tel Aviv pilot is successful, more city roads will be equipped with the below-surface technology. The municipality said it plans to examine adding other forms of transportation to the electric roads, such as distribution trucks and private and autonomous vehicles.