An Israeli senior executive at Zoom has spoken about the meteoric rise in use of the company’s videoconferencing app amid coronavirus lockdowns, saying it was the Jewish holiday of Passover that made him realize how large an impact the technology was having around the world.

Chief Product Officer Oded Gal told Israel’s Channel 12 news that in the run-up to Passover, he received messages from Jewish people all over the world telling him that they would be using Zoom to stay in contact with family and friends during the traditional Seder feast, held on the first night of the week-long festival.

Due to lockdown measures in many countries, local Jewish communities were forced to hold the event, which this year fell on April 8, with only their nuclear families, eschewing the large social gatherings that are the traditional format for the Seder.

“I received messages from all over the world in which people told me how excited they are to be able to hold the Seder on Zoom,” he said in a video interview from San Francisco that was broadcast on Friday.

“As an Israeli and a Jew, it was really great to see how we are supporting the Jewish community around the world,” he said.

The company received “fantastic feedback” on how it was able to help people during the virus lockdowns, Gal said.

Among those who have used the app are President Reuven Rivlin, who spoke with Jewish leaders around the world ahead of Passover, and with members of his own family on the last day. 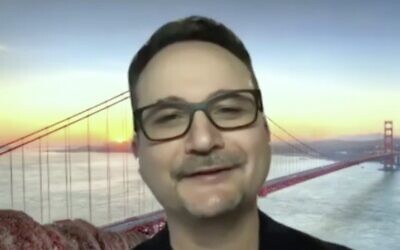 Screen capture from video of Oded Gal, Chief Product Officer at Zoom, during an interview with Channel 12 news. (Channel 12)

But amid its newfound fame, the Silicon Valley-based company has come under stepped-up scrutiny over how it handles privacy and security — including allowing uninvited guests to barge in on sessions.

Gal acknowledged there had been issues, and explained that the app had not initially been designed for such widespread use by the general public.

“We built our system for business clients and we relied on the managers to set up the security definitions according to their needs,” he said. “We are really sorry that things like that happen.”

Another concern has been the ability of the app to record video meetings, though Gal pointed out that the recording option is controlled by the users and that recordings are stored only on users’ devices.

The key to the app’s popularity is that it has a focus on video rather than just enabling messaging or cooperation via the web, Gal said.

“There are many cooperation applications, but none of them focused on video — we thought of that, and we’ve built the system so that it will be video first,” he said.

The company’s goal is to see video conferencing become the default for long-distance communication.

“In our view, visual communication is the ultimate form of communication,” Gal said and offered a tip for improving the user experience in some video meetings by turning off the sound filters.

“The filter is intended to remove background noise, but if you want to play [music] or sing, it is better to choose the option of ‘original sound,‘” he advised.

Zoom lets as many as 100 people simultaneously attend a videoconference, allowing 40 minutes free and then charging for premium accounts that provide more time and features for $15 monthly.

Zoom lifted the 40-minute limit on free accounts for teachers in many countries. After Israel’s education system was shut down in March due to the coronavirus outbreak, teachers and university tutors used Zoom to continue classes for students.