Moody’s said in a statement that it lowered the outlook from positive to stable due to “the recent deterioration in the budget deficit,” which has been made worse by the coronavirus pandemic.

It also cited the weakening effectiveness of Israeli fiscal policy, “driven in part by a more polarized political environment.”

Moody’s noted that the budget deficit had been growing before the start of the COVID-19 pandemic and last year was over the 2.9 percent target set by the government.

It forecast a 9% deficit on the year. 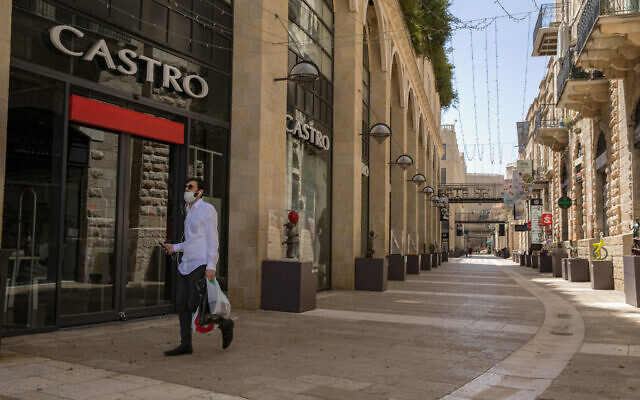 A man walks by closed shops in the Mamilla Mall near Jerusalem’s Old City on April 22, 2020. (Olivier Fitoussi/Flash90)

Concerning fiscal policy, Moody’s said the ongoing political stalemate, which has included three consecutive elections over the past year, has left Israel without a fully functioning government able to make significant fiscal adjustments.

However, it said the agreement reached this week between Prime Minister Benjamin Netanyahu and Blue and White chairman Benny Gantz to form a “national emergency” government lowered the chance of immediate fourth elections and would likely lead to the passing of a budget.

“That said, Moody’s expects the elaboration of an effective post-crisis fiscal strategy that would seek to bring the government debt burden quickly back to 2019 levels will be challenging given the likely impact of a more fractured political environment on policymaking,” Moody’s said. 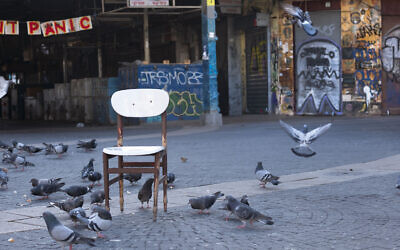 In this March 25, 2020, photo, a ‘don’t panic’ sign hangs on the entrance of a food market that was shut down in order to reduce the spread of the coronavirus, in Tel Aviv, Israel. (AP Photo/Oded Balilty)

As with other countries, Israel’s economy has been hard hit by the closure of businesses due to the imposition of far-reaching measures to contain the virus.

Since the government began introducing lockdown restrictions requiring most Israelis to remain at home except for essential needs, the unemployment rate has rocketed from around four percent at the beginning of March to 27.05% by Thursday, with over 1,125,000 now jobless.

The government has approved a number of measures to provide economic relief and on Friday green-lighted a NIS 8 billion ($2.27 billion) plan to increase support for self-employed Israelis and small business owners, many of whom have decried what they say is a lack of state assistance during the crisis.