AFP — From biblical plague to modern day protein, one Israeli firm wants to make locusts a sustainable food choice in the Holy Land and beyond.

As for whether or not the insects are kosher, the answer is not so simple.

At Hargol Foodtech’s farm in the Golan Heights, a rectangular enclosure that once served as a chicken coop is filled with thousands of locusts, a grasshopper species that has a highly destructive swarming phase.

Contained in a series of meticulously stacked, climate-controlled mesh cages, the insects are served wheatgrass through their three-month life-cycle, before being cooled, killed and baked.

Hargol’s chief executive Dror Tamir told AFP that he grew up hearing stories of how locusts destroyed the fields of his kibbutz in the 1950s.

Yet the Yemenite Jews in the area did not view locusts as crop-ruining pests, but as an edible source of nutrients, Tamir recalled. 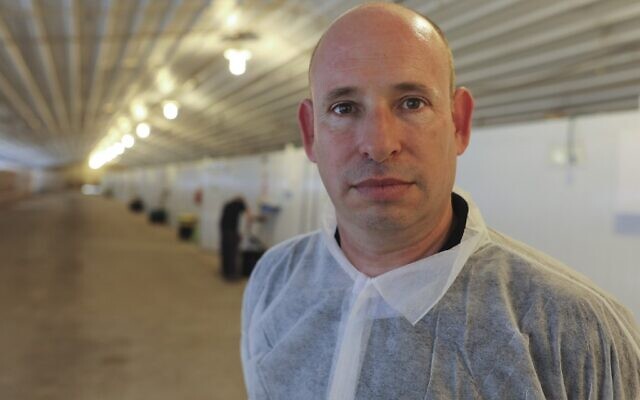 Dror Tamir, founder and the CEO of Hargol grasshoppers breeding farm, at his farm in Kidmat Tzvi in the Golan Heights on July 12, 2020. (Photo by MENAHEM KAHANA / AFP)

As an adult, Tamir became a food and nutrition entrepreneur increasingly concerned about the environmental cost of providing the world’s growing population with enough animal protein.

Tamir said he founded Hargol — Hebrew for grasshopper — six and a half years ago after realizing the insects were the solution.

The company’s goal is to be “the first in the world to grow grasshoppers on a commercial scale, and provide the world with a healthier and more sustainable source of protein.”

Ram Reifen, a professor of human nutrition at Hebrew University, agreed that the planet is facing growing food supply challenges.

With Earth’s population expected to hit 10 billion by 2050, raising livestock to feed the planet will become increasingly unsustainable, given the massive water and land resources required.

“The fear is there will be a scarcity of protein,” Reifen told AFP. 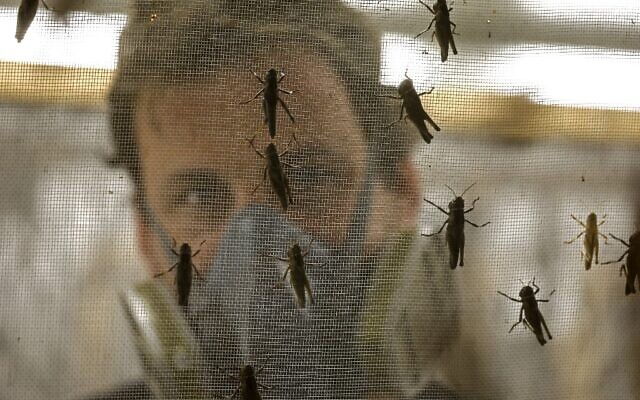 A worker at the Hargol grasshoppers breeding farm looks at grasshoppers at the farm in the Kidmat Tzvi settlement in the Golan Heights on July 12, 2020. (Photo by MENAHEM KAHANA / AFP)

Tamir said that unprocessed locusts consist of more than 70 percent protein and contain all amino acids, along with other nutrients.

“What they do lack is saturated fat and cholesterol,” he said. “They have the good stuff. They don’t have the bad stuff.”

According to his own estimate, around 2.5 billion people — mainly in developing nations — consume insects as part of their regular diet.

And, the “most widely eaten insects in the world are grasshoppers,” Tamir said.

But, he added, “when trying to target North American and European customers, it’s really hard to overcome the ‘yuck’ factor.” 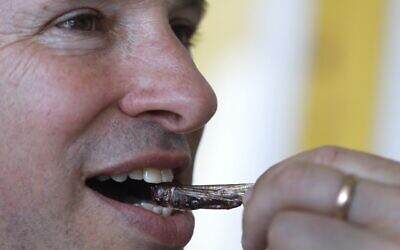 Dror Tamir, founder and the CEO of Hargol grasshoppers breeding farm, eats a grasshopper at his farm in Kidmat Tzvi in the Golan Heights on July 12, 2020. (Photo by MENAHEM KAHANA / AFP)

To make its product more palatable to Westerners, Hargol turns locusts into powder, which can be mixed into various foods.

Tamir said the company was about to launch sales of locust-enhanced pancake mix and smoothie powders worldwide.

Some goods produced in the Golan Heights face export restrictions, including strict labeling requirements, because most of the international community does not recognize Israeli sovereignty in the area.

But Tamir said that while the locusts are grown in the Golan and another site in the Galilee, the powder is produced elsewhere within Israel, enabling him to avoid export restrictions.

Investor support has helped sustain the company before sales tick up, he added.

But is it kosher?

In the Bible, locusts appear in the Book of Exodus as one of the Ten Plagues unleashed on the Egyptians to force the Pharaoh to free the Israelites from slavery.

In Leviticus, there is a passage stating that certain kinds of grasshopper, including locusts, are kosher.

Jews in Yemen and North Africa have been eating locusts for generations, but European, or Ashkenazi, Jews have not.

Tamir said he hoped that he could bring locusts into mainstream Israeli cuisine by getting a kosher certification for his product from the country’s chief rabbinate.

Rabbi Eliezer Simcha Weisz, a member of the Chief Rabbinate Council, Israel’s top religious adjudication body, told AFP the issue of whether locusts are kosher had been discussed at “great length.”

And while the Torah designates some species as kosher — including the one raised by Tamir — it forbids others, he said. 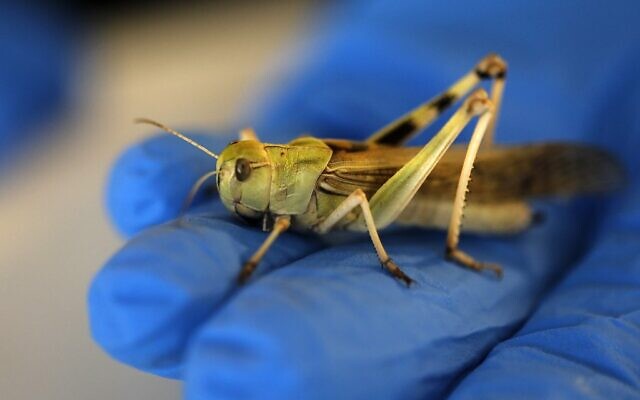 A worker at the Hargol grasshoppers breeding farm holds a grasshopper at the farm in Kidmat Tzvi in the Golan Heights on July 12, 2020. (Photo by MENAHEM KAHANA / AFP)

In the rabbinic literature of Ashkenazi Jews, “for the last 400 to 500 years, it’s specifically stated that we have a tradition to not eat these locusts,” he said. “That’s why it probably will not be accepted generally by all communities to eat the locusts,” he said, noting the chief rabbinate has put off a final decision on the question.

But Weisz said that despite the complexity of getting approval from the chief rabbinate, a local Golan rabbi could approve the product.

Overall, he said, the return of locusts to Jewish cuisine was “a wonderful thing.”

“I think the fact that in the Torah it says you can eat them, it seems to indicate… that it could be the food of the future,” Weisz said. “Who would have thought!”

Tamir remained optimistic the rabbinate would ultimately give its approval, noting support from prominent rabbis and a planned cooperation with Tnuva, Israel’s largest food producer, to manufacture locust protein powder for athletes by the end of the year.

Meanwhile, Tamir is aiming his products at American and European Christians with grasshopper-enhanced energy bars and jars of roasted grasshoppers alongside Israeli honey.

“According to the New Testament, John the Baptist used to eat locusts with honey,” he said.

Times of Israel staff contributed to this report.