Israeli biopharmaceutical firm RedHill Biopharma Ltd. said Tuesday that a drug it is developing has shown to be a “potent” inhibitor of the virus that causes COVID-19 in an in-vitro model of human lung bronchial tissue.

The drug, called Opaganib “completely inhibited” the replication of the SARS-CoV-2 virus, as measured after three days of incubation, in an in vitro model of human bronchial tissue, and compared “favorably with Remdesivir, the positive control in the study,” the company said in the statement.

Remdesivir, an antiviral medication developed by Gilead Sciences, has been authorized in the US and other countries for emergency use to treat COVID-19 patients, and is being tested as a treatment for the illness. 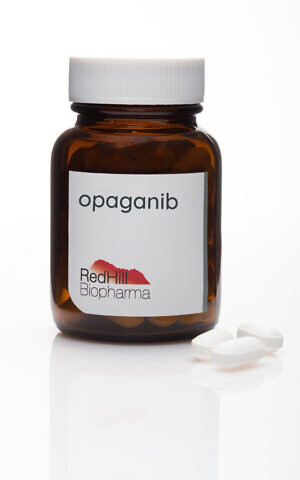 Working in collaboration with the University of Louisville Center for Predictive Medicine, Opaganib was studied in a 3D tissue model of human bronchial epithelial cells which morphologically and functionally resembles the human airway, the statement said.

The study was designed to evaluate the in-vitro efficacy of Opaganib, an orally administered drug, in inhibiting SARS-CoV-2 infection.

Results from the study “showed a clear and compelling antiviral effect of Opaganib against SARS-CoV-2. Opaganib demonstrated the most potent activity compared to all compounds tested, including the positive control, Remdesivir,” the statement said.

Data from the study is planned to be submitted to a peer-reviewed journal, the firm said.

Opaganib’s promise is based on a dual-action molecule that performs anti-inflammatory as well as anti-viral activity.

The new data, demonstrates “Opaganib’s potential to strongly inhibit SARS-CoV-2 viral replication,” validating the hypotheses the underlies RedHill’s ongoing global Phase 2/3 and US Phase 2 clinical studies, he said. “Accordingly, we are accelerating progress toward our goal of generating a robust data package to potentially support emergency use authorizations for COVID-19.”

RedHill is in discussions with US government agencies to get potential funding to support the rapid development of the drug toward potential emergency use approval, the statement said.

The company added that a second COVID-19 drug candidate it is developing, called RHB-107, also strongly inhibited the SARS-CoV-2 viral replication in the same model, supporting the setting up of Phase II/III outpatient study in the US later this year.