As the Energy Ministry continues to consider raising the 2030 target for renewable energy from 17 percent to 30% and to encourage increased use of solar panels, researchers at Ben-Gurion University of the Negev have developed a system that could help planners work out where best to place solar panels on urban rooftops for maximum solar energy.

The researchers, professors Arnon Karnieli and Isaac Meir, and Karnieli’s student, Arti Tiwari, set out to find an efficient way of measuring the potential for photovoltaic solar energy installations in an urban environment with flat and pitched roofs, at different angles of slope and pointing in different directions.

Because of the complex geometry of roofs, they needed very high-resolution data with which to create an algorithm that could classify buildings.

Using the southern Israeli city of Kiryat Malachi as their test site, they took an orthophoto produced by the Survey of Israel in 2012 (ortho-rectification corrects aerial photos geometrically so that the scale is uniform) and a LiDAR map from 2015 (LiDAR uses laser light and sensors to measure distances). 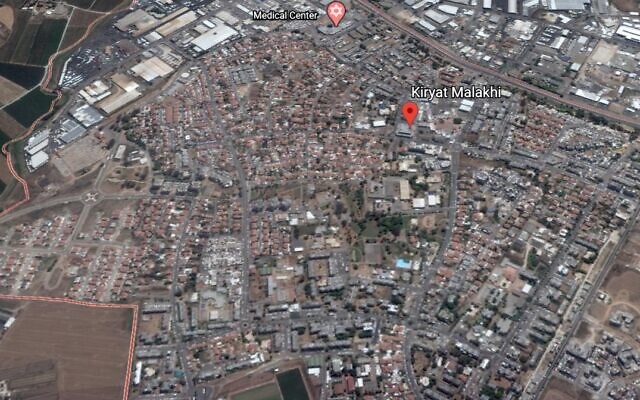 An aerial view of the southern city of Kiryat Malachi. (Google earth screenshot)

After combining the data, they produced an aspect slope map that can be used with with 97.39% accuracy to determine the direction and degree of slope of all the roofs across Kiryat Malachi — data that is important for working out the potential for solar energy absorption.

A university spokesperson said this is the first time an entire city has been mapped to such a high level of accuracy. It was aimed at potential customers such as urban planners, solarpower companies and the Energy Ministry, he added.

The research findings were published in the journal Remote Sensing.

Prof. Karnieli is head of the Remote Sensing Laboratory, the Jacob Blaustein Institutes for Desert Research, BGU in Sde Boker. Prof. Meir is a member of the Department of Structural Engineering, Faculty of Engineering Sciences on the Marcus Family Campus in Beersheba.

Last July, the Energy Ministry and the Electricity Authority launched a campaign to persuade Israelis to erect solar panels on domestic roofs, which would earn them money for surplus energy that goes into the grid and help cut pollution. Solar panels were present on around 13,000 roofs when the campaign began, the vast majority of them agricultural, commercial or industrial, such as shopping centers.

The aim is to double that number of roofs by the end of this year, largely by encouraging residential property owners to spend NIS 55,000 to NIS 150,000 ($15,500 to $42,300) on solar panel systems that become profitable after eight to 10 years. Prices of photovoltaic panels have come down by some 80% over recent years.