Yaara, a 22-year-old Jewish paramedic from Giv’at Ada, Israel, and Zafer, a 25-year-old Palestinian general practitioner in the West Bank city of Nablus are working together on an app to help medical staff communicate better while transferring Palestinian patients from the West Bank to Israel. Their idea took first prize in a Google-sponsored competition.

At the moment, Palestinian patients who need to be treated in Israel, because their condition cannot be adequately addressed in West Bank hospitals, are transferred by ambulance to Israeli checkpoints, from where they are taken by another ambulance to hospitals in Israel.

When these transfers occur, communication between the parties is often flawed, and one of the biggest issues is a lack of clear information exchange between the two ambulances.

These delays and miscommunication can be catastrophic — especially with patients who are in critical condition or need urgent medical attention, according to Zafer. 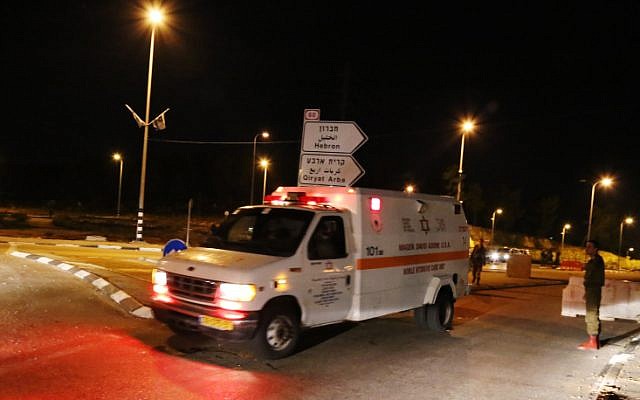 Illustrative photo of an ambulance at the Etzion Junction in the West Bank (photo credit: Gershon Elinson/Flash90)

“In the time it takes to transfer patients, a lot can change with regards to their health status, especially if they’re not stable,” Zafer said. “A lot of the time, problems happen. Delay and miscommunications can lead to death.”

As a paramedic who has worked in the West Bank, Yaara said, she has seen firsthand a lot of miscommunication on the job. Initial reports sometimes contain misleading or completely incorrect information about the patient’s situation, she said, which means she might arrive at a scene completely unprepared to administer the necessary treatment.

“The consequences of such a problem can be devastating,” said Zafer, and greater cooperation between parties at both sides of the divide would be able to address this problem.

That is what Zafer and Yaara have set out to do with their app, aptly named “Care and Transfer” — to help medical staff in Israel and the West Bank communicate with each other while transferring a patient from an ambulance to a hospital or another ambulance.

The app, available on smartphones and hospital computers, would enable medical staff to have a direct line of communication with each other to exchange information on a patient’s medical background or current status.

Though a main focus of the app would be medical transfers, the hope is for better communication between moving parts in general.

“We want to make the cooperation between the two health systems better,” Yaara said. “Now, there is no technical way to deliver information between the two sides — it’s only about calling each other and sending faxes. There’s no website where you can upload information, like in a Palestinian hospital to a place at an Israeli hospital. [The app] will make the process much more comfortable and much faster.”

The hope is that the app will decrease wait times, reduce mistakes and improve general communication, with the greater goal of helping break down Israeli and Palestinian barriers in the medical world. More dialogue and cooperation might just make the difference in someone’s life, Yaara and Zafer said in a phone interview with The Times of Israel.

The two met last month at the Tech2Peace initiative, a 12-day stretch of tech and peacebuilding seminars for Palestinians and Israelis. The seminars took place at Jisr az-Zarqa, a coastal town between Tel Aviv and Haifa, where the participants stayed in guesthouses. The program included workshops for mobile apps, programming, graphic design and conflict resolution.

Tech2Peace is focused on creating strong relationships between young Palestinians and Israelis, and includes learning about collaboration in the technology sector.
Yaara and Zafer both were made aware of Tech2Peace through Facebook advertisements. Intrigued by the opportunity to connect with people on the “other side” and break down the discourse barriers that often separate Israelis and Palestinians, they both applied and were accepted.

Living and thinking together

Everyone at Tech2Peace lived together throughout the 12-day period, and Zafer said that led to real friendships among participants.

Zafer and Yaara struck up a friendship during a “dialogue seminar,” a group setting where participants can learn more about each other’s backgrounds. Their mutual work in medicine clinched the tie.

Yaara said her favorite part of Tech2Peace was the dialogue surrounding the Israeli-Palestinian conflict and how participants were able to express their views through their emotions.

Yaara came up with the idea for the app, and worked with Zafer and three others to develop the idea. At the end of the program the various participating teams presented their creations to judges from Google for Startups, the tech giant’s startup program that seeks to help aspiring entrepreneurs.

Yaara and Zafer’s idea won first place in the competition and the victory has introduced them to mentors and paved the way to connections in the tech and startup sectors, as well as investors.

Right now, Yaara and Zafer, who preferred that their last names not be used, are in the research phase of their initiative, focusing on uncovering the exact steps between the moment a doctor decides a patient needs to be transferred to Israel and the moment a Palestinian ambulance transfers that patient to an Israeli ambulance. There are lots of moving parts, involving hospital departments, government approvals and communication between ambulances.

The duo is also looking into participating in more accelerators and hopes to sharpen their idea.

Despite the difficulties of working remotely — stemming from the pandemic and the Israeli-West Bank divide — which prevents the duo from meeting up, Yaara said she feels a natural connection working with Zafer.