Tel Aviv University is planning to launch a research nanosatellite, the size of a shoebox, hitching a ride on a spacecraft sent by NASA and US aerospace firm Northrop Grumman to resupply the International Space Station in the first quarter of 2021.

Once it’s at the ISS, a robotic arm will release the TAU-SAT1 nanosatellite into low-earth orbit (LEO). The satellite will conduct several experiments while in orbit, including measuring cosmic radiation in space.

The TAU-SAT1 is currently undergoing pre-flight testing at the Japan Aerospace Exploration Agency (JAXA). From Japan, the satellite will be sent to the United States, where it will “hitch a ride” on the resupply spacecraft, the university said in a statement on Sunday.

“This is a nanosatellite, or miniature satellite, of the ‘CubeSat’ variety,” said Ofer Amrani, head of Tel Aviv University’s miniature satellite lab, in the statement. “The satellite’s dimensions are 10 by 10 by 30 centimeters, (4 x 4 by 12 inch) the size of a shoebox, and it weighs less than 2.5 kilograms (5.5 pounds). TAU-SAT1 is the first nanosatellite designed, built and tested independently in academia in Israel.” 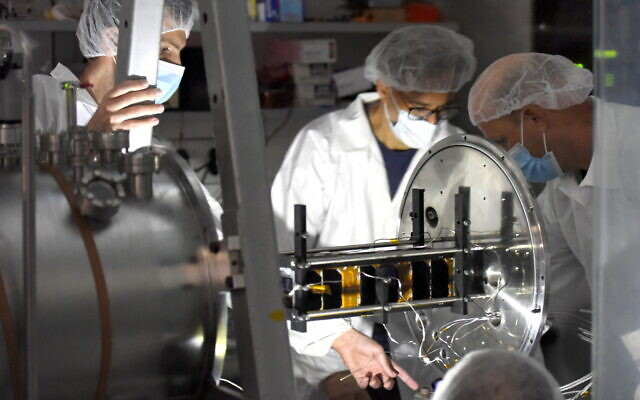 The TAU-SAT1 was created, developed, assembled, and tested at the new Nanosatellite Center in Tel Aviv, an interdisciplinary venture of the Faculties of Engineering and Exact Sciences and the Porter School of the Environment and Earth Sciences of the university.

Approximately 400 kilometers (249 miles) above sea level, the nanosatellite will orbit the earth at a speed of 27,600 kilometers (17,150 miles) per hour, or 7.6 kilometers (4.72 miles) per second, completing an orbit around the Earth every 90 minutes, the statement said.

“We know that that there are high-energy particles moving through space that originate from cosmic radiation,” said Meir Ariel, director of the university’s Nanosatellite Center. “Our scientific task is to monitor this radiation, and to measure the flux of these particles and their products.”

Space is a hostile environment, not only for humans but for electronic systems as well, Ariel explained. When these particles hit astronauts or electronic equipment in space, they can cause significant damage.

“The scientific information collected by our satellite will make it possible to design means of protection for astronauts and space systems,” Ariel said.

One of the challenges is how to extract the data collected by the TAU-SAT1 satellite, and for that purpose the researchers set up a satellite station on the roof of the engineering building at the university. 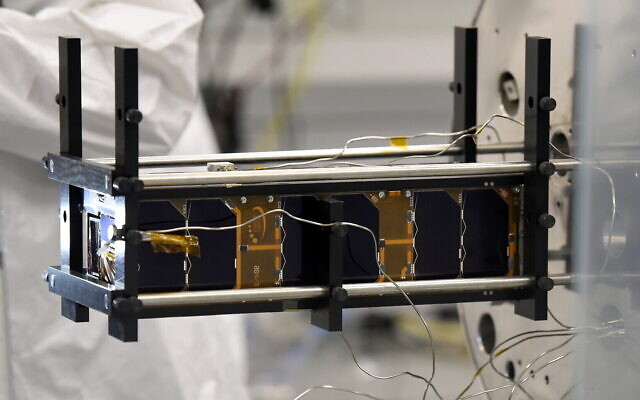 The nanosatellite developed by researchers at Tel Aviv University (Courtesy)

“Our station, which also serves as an amateur radio station, includes a number of antennas and an automated control system,” said Amrani. “When TAU-SAT1 passes over the State of Israel, that is, within a few thousand-kilometer radius from the ground station’s receiving range, the antennas will track the satellite’s orbit and a process of data transmission will occur between the satellite and the station. Such transmissions will take place about four times a day, with each one lasting less than 10 minutes.”

In addition to its scientific mission, the satellite will also serve as a space relay station for amateur radio communities around the world. In total, the satellite is expected to be active for several months. Because it has no engine, its trajectory will sag over time as the result of atmospheric drag. It will burn up in the atmosphere and come back to earth as stardust, the university said. 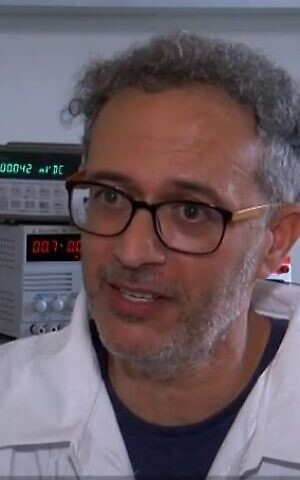 The launch of the TAU-SAT1 is Tel Aviv University’s first step in joining the global space revolution in which research is opening up to civilian institutions and companies.

“We are seeing a revolution in the field of civilian space,” said Colin Price, one of the academic heads of the new center. “We call this new space, as opposed to the old space where only giant companies with huge budgets and large teams of engineers could build satellites. As a result of miniaturization and modulation of many technologies, today universities are building small satellites that can be developed and launched in less than two  years, and at a fraction of the budget in the old space.”

The Tel Aviv University nanosatellite was built and tested with the help of a team of students and researchers, which built all of the infrastructure including cleanrooms, various testing facilities such as the thermal vacuum chamber, and the rooftop receiving and transmission station.

In 2017, Ben-Gurion University of the Negev (BGU) launched a nanosatellite into space to conduct scientific missions for researchers, the result of a five-year project developed by BGU, Israel Aerospace Industries Ltd., and the Ministry of Science, Technology and Space.

NSLComm, an Israel-based aerospace tech startup that developed a nanosatellite that expands in space to boost connectivity capacity, launched its first satellite, the NSLSat-1, in 2019, as part of the payload of a Soyuz rocket. In September, the Dido-3 nanosatellite, weighing just 2.3 kilograms (five pounds), was launched into space as a product of Israeli-Italian collaboration, to perform experiments and gather medical, biological and chemical data.

And in April 2019, Israel’s Beresheet spacecraft crashed into the moon’s surface, shattering the dreams of the nation of putting a craft on to the Earth’s satellite.

Now that the infrastructure has been created, researchers at Tel Aviv University can already start to develop TAU-SAT2, the statement said.

“The idea is that any researcher and any student, from any faculty at Tel Aviv University, or outside of it, will be able to plan and launch experiments into space in the future – even without being an expert in the field,” the statement said.