The United States Commodity Futures Trading Commission (CFTC) published a legal notice in The Times of Israel on May 21 in an attempt to inform three Israelis — Yossi Herzog, Yakov Cohen and Shalom Peretz — as well as the company Yukom Communications that they have been sued by the US government.

The CFTC published the notice after a judge agreed on April 20 to allow the CFTC to serve the defendants with legal documents “by alternative means” because the US government’s attempts over the previous eight months to send them a complaint and summons had failed.

Yukom Communications Ltd. appears to no longer be operating, the CFTC said in a recent legal filing, while defendants Cohen and Herzog are no longer in Israel. The CFTC has no idea where they are, it said.

The CFTC had filed a lawsuit last August 12 against companies and individuals associated with the binary options websites BigOption, BinaryBook and BinaryOnline, charging them with $103 million of “fraud relating to a global retail binary options enterprise that targeted and victimized US residents.” 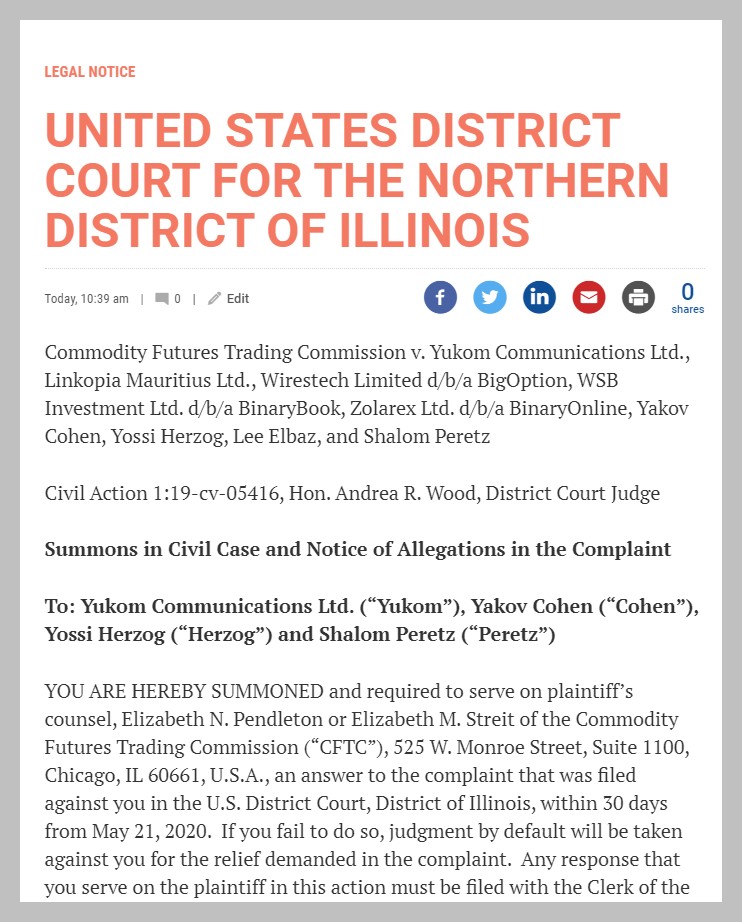 Screenshot showing detail of a legal notice regarding binary options defendants, published by the US CFTC on The Times of Israel website, May 21, 2020

Elbaz was convicted of fraud in a criminal case on August 7, 2019, and later sentenced to 22 years in prison. She was served with documents from the CFTC last August at the Correctional Treatment Facility in Washington, DC.

Her former bosses, Cohen and Herzog, were indicted by a grand jury in February 2019 with a superseding indictment against them unsealed in November 2019. The criminal indictment is separate from the CFTC civil charges.

However, the CFTC’s inability to locate them suggests that they may not show up for US criminal proceedings against them either. 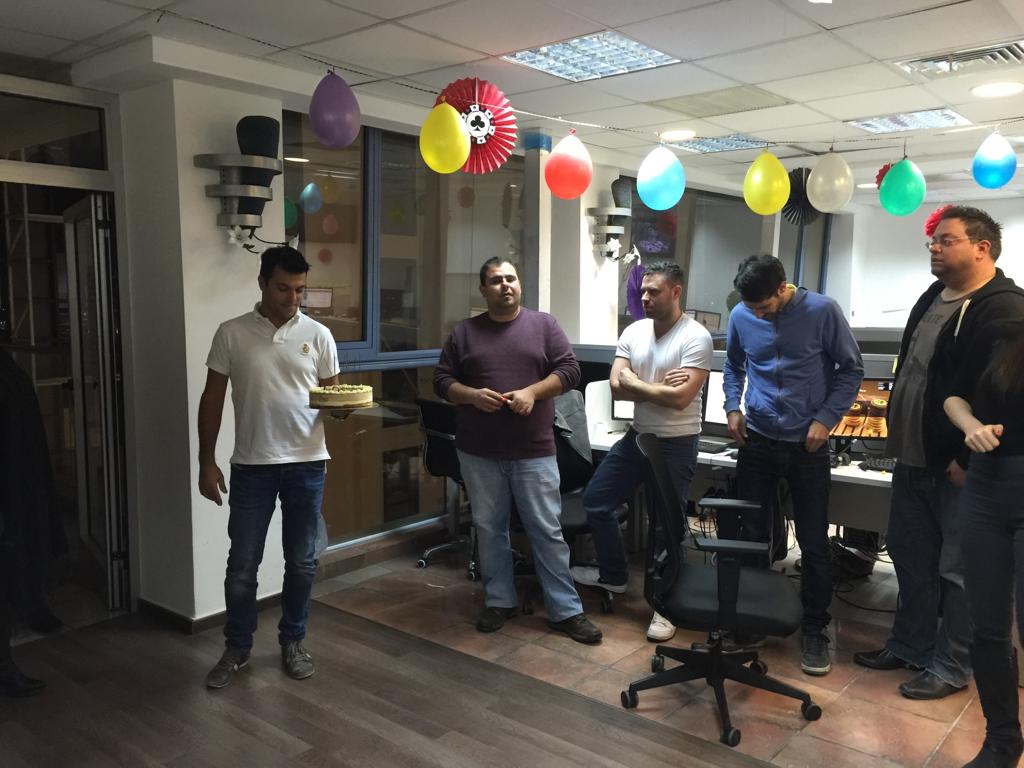 While the CFTC has successfully served Elbaz, Linkopia Mauritius Ltd., Wirestech Limited, WSB Investments Ltd., and Zolarex Ltd. with legal documents, the US regulator has failed to serve the defendants Cohen, Herzog, Peretz and Yukom Communications Ltd., despite repeated efforts to do so.

According to the law in the United States and many other countries, plaintiffs in a civil lawsuit are required to serve defendants with a summons and/or complaint in order for the court to have jurisdiction over them. One way that defendants abroad can be served, according to the Hague Convention of Service Abroad, is by registered mail.

According to CFTC lawyers in the case, Elizabeth Pendleton, Elizabeth Streit and Scott Williamson, multiple attempts to serve the Israeli defendants were unsuccessful.

The lawyers claim that Yukom Communications, one of the Israeli call centers that ran the binary options websites, appears to no longer be active.

“Shortly after filing the complaint, the commission confirmed Yukom’s registered address with the Israel Securities Authority, the national securities regulator of Israel, and sent summons and the complaint to that address via registered mail,” read a court filing.

But the CFTC’s package was returned.

“On or around November 12, 2019, the commission’s service packet was returned unexecuted with a stamp stating that Yukom had ‘gone away.’”, according to the CFTC lawyers. “The likelihood that Yukom is no longer actively doing business is bolstered by the fact that the websites allegedly used by Yukom to perpetuate the fraudulent binary options scheme – including www.yukom-com.com and yukomgroup.com – are no longer active.”

As for Cohen, one of the alleged owners of Yukom and its associated companies, a registered letter sent to his last known address in Israel was returned to the CFTC marked “refused.”

According to a court filing, the CFTC “has received information indicating that Cohen may be located somewhere in the Congo.”

A registered packet sent to Herzog’s last address in Israel appears to have been lost in transit. The CFTC indicated it has no idea where he is.

“Herzog is not currently in Israel,” the lawyers said. “[The CFTC] has communicated with representatives of various foreign financial regulatory agencies in an ultimately unsuccessful attempt to determine Herzog’s current geographic location.”

Lawyers for the Department of Justice told the CFTC in January that no lawyer had yet made an appearance on behalf of Cohen or Herzog in the criminal proceedings, nor had they spoken to any lawyer who currently represents them.

Meanwhile, registered mail to the last known address of Peretz, who is not being prosecuted by the Department of Justice, but merely sued by the CFTC, was returned to the CFTC marked with the words “gone away.”

“The Commission has been unable to identify a new address for Peretz and therefore, despite the Commission’s diligent efforts, Peretz’s whereabouts are currently unknown,” said the CFTC.

Acknowledging these difficulties, on April 20, a judge granted the CFTC’s request to service the defendants by “alternative means.” These means consist of sending a summons and complaint to the defendants by regular mail, sending documents to email addresses they have used in the past and publishing a legal notice in the Times of Israel.

Where did the defendants go?

In a document dated January 15, CFTC attorneys Pendleton, Streit and Williamson alleged that “three of the individual defendants have fled from their registered addresses in Israel and may be seeking to evade responsibility for their fraudulent actions.”

They said that Cohen was last believed to be in the Congo. Cohen had reportedly been active there for several years, running a sports betting company, according to a phone conversation the FBI retrieved from Elbaz’s phone after her arrest and played during her July-August 2019 trial.

As for Peretz, while there is no record of him leaving the country, he could have moved within Israel without notifying the government, a situation that is not uncommon, a lawyer familiar with the service process told The Times of Israel.

Herzog, one of the owners of Yukom Communications and related companies, appears to have been in Israel as recently as June 2019, according to US court filings.

On April 24, 2019, three months before her scheduled trial, Elbaz had filed a motion asking for permission to take videotaped depositions of former Yukom executives.

“Lee Elbaz moves for an Order permitting her to take videotaped depositions in Israel of Yossi Herzog, Elad Bigelman, Nissim Alfasi and Chanan Tabarko in order to preserve the testimony of these individuals for trial,” the motion said.

On May 15, 2019, the judge granted Elbaz’s request and the depositions were set to begin in Israel on June 19, 2019, suggesting that Herzog was still in Israel in June. 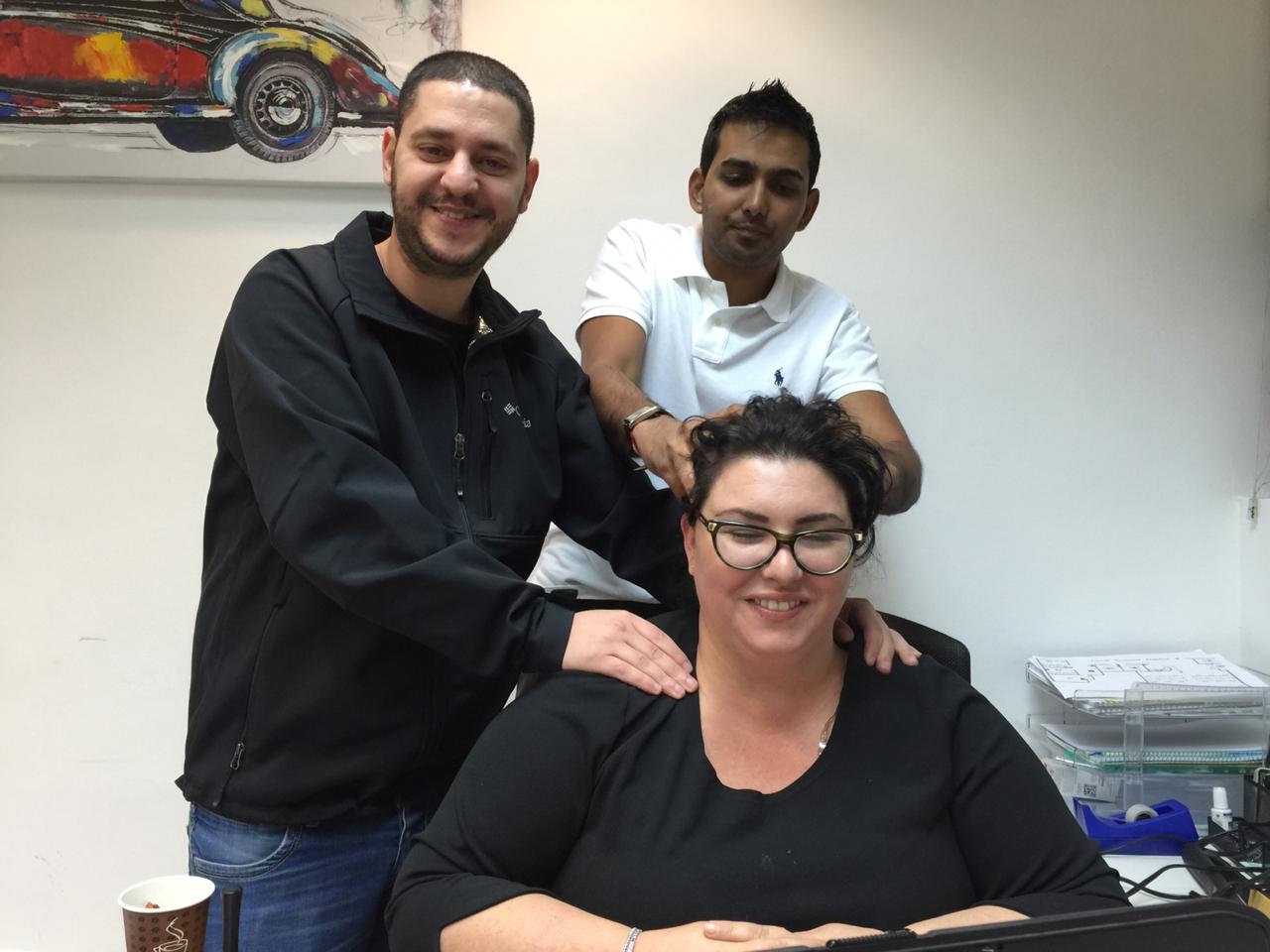 Nissim Alfassi (l), Runal Jeebun and convicted binary options operative Lee Elbaz (seated) in an undated photo. Alfassi and Jeebun were two of 15 employees and executives of Yukom Communications indicted by the US Department of Justice in an indictment dated September 25, 2019 and unsealed November 8, 2019. (Photo: Anonymous source)

By June 11, court filings show, the Department of Justice had replaced the prosecutors on the case with three new prosecutors, one of whom, Henry Van Dyck, reportedly called Herzog’s lawyer, Zvi Gabbay, and reportedly told him that he had been indicted in February, that the indictment against Herzog was sealed, and that extradition proceedings would likely soon commence, according to a June 15 affidavit by Gabbay.

“Mr. Van Dyck said that the reason he was telling me about the charges pending against Mr. Herzog at this time was that he thought that Mr. Herzog should have this information before voluntarily providing testimony in Ms. Elbaz’s case,” Gabbay stated.

A redacted indictment was unsealed soon afterwards and Herzog subsequently changed his mind about testifying on Elbaz’s behalf.

On August 22, two weeks after Elbaz had been convicted, the CFTC learned from the Israel Securities Authority that Herzog was no longer in the country.

A researcher at the Israel Securities Authority, Lior Shpitz, sent an email to the CFTC with the following statement: “Please note that according to our records Shalom Peretz is the only person that is currently in Israel. The rest of those involved are currently abroad.” 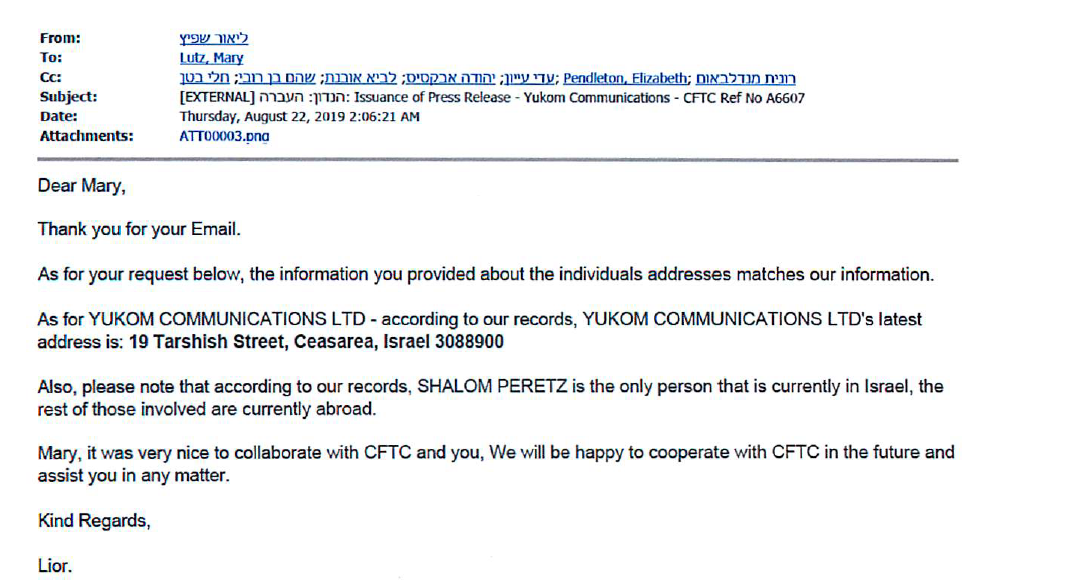 An August 22, 2019 email from the Israel Securities Authority to the CFTC advising them that Yossi Herzog and Kobi Cohen are no longer in Israel (Screenshot of CFTC exhibit)

The Israel Securities Authority presumably knew this because Herzog had not absconded across the border but had left via an official border crossing where his departure would have been recorded by the government.

The Times of Israel contacted Israel’s Justice Ministry to ask whether it had received an extradition request from the US Department of Justice prior to Herzog’s departure and whether such a request would have been a prerequisite for preventing him from leaving the country.

A spokeswoman said “we do not speak about the existence or non-existence of extradition requests except when the process is public.”

The summons published by the CFTC on Thursday informs Cohen, Herzog and Peretz that they are required to answer the CFTC’s complaint against them within 30 days.

The allegations against the defendants are that beginning on or around March 26, 2014, the defendants “fraudulently solicited individuals throughout the United States and other countries to enter into illegal, off-exchange transactions in binary options through fictitious entities using the trade names BigOption, BinaryBook, and BinaryOnline.”

These brands, said the complaint, were under the ownership and control of Cohen and Herzog, whose employees “made material misrepresentations and omissions to induce customers to trade, including misrepresenting the profit potential and fundamental nature of the binary options offered, falsely stating that their interests were aligned with the interests of customers, and failing to disclose that Yukom was on the opposite side of all customer trades and profited from customer losses.”

The binary options industry flourished in Israel for a decade before it was outlawed via Knesset legislation in October 2017, largely as a result of investigative reporting by The Times of Israel that began with a March 2016 article entitled “The wolves of Tel Aviv.”

At its height, hundreds of companies in Israel employed thousands of Israelis who allegedly fleeced billions out of victims worldwide. The fraudulent firms would dupe victims into believing that they were successfully investing and earning money, encouraging them to deposit more and more into their accounts, until the company eventually cut off contact with the investor and disappeared with all or almost all of their money.

Israeli prosecutors have yet to indict a single binary options suspect on charges of fraud, while the United States has indicted about two dozen and taken civil enforcement actions against many others.