Israel’s unemployment level is likely to level off in the coming months as the government rolls back coronavirus containment restrictions, but will remain high throughout the year, according to an analysis released Wednesday.

The average rate of unemployment for the year is likely to reach 11.5 percent, and some 360,000-400,000 workers will remain jobless at the end of 2020, the Israel Democracy Institute think tank said. That figure is nearly three times higher than pre-crisis levels, when about 140,000 Israelis were unemployed.

Since the government began introducing lockdown restrictions requiring most Israelis to remain at home except for essential needs, the unemployment rate has rocketed from around 4% at the beginning of March to 26.25% by mid-April, leaving over 1 million jobless.

On Sunday, the cabinet approved a slight easing of the restrictions that have brought the economy to an almost total standstill. However, non-essential small businesses, such as those in the culture, fashion, and beauty industries as well as shopping malls, could still face a long wait until they are able to return to full work. Pundits have predicted they will be among the last released from restrictions in any plan to end the lockdown.

The unemployment rate, which includes workers on unpaid leave, is likely to begin a gradual decline in May, the think tank said in an analysis authored by economics expert Daphna Aviram Nitzan, formerly of Bar-Ilan University and the Manufacturers Association of Israel.

The first to resume their jobs are likely to be people on unpaid leave in the fields of tech, industry and business services, and professionals including accountants, lawyers and consultants.

Many workers will return to their jobs in a limited capacity, however. 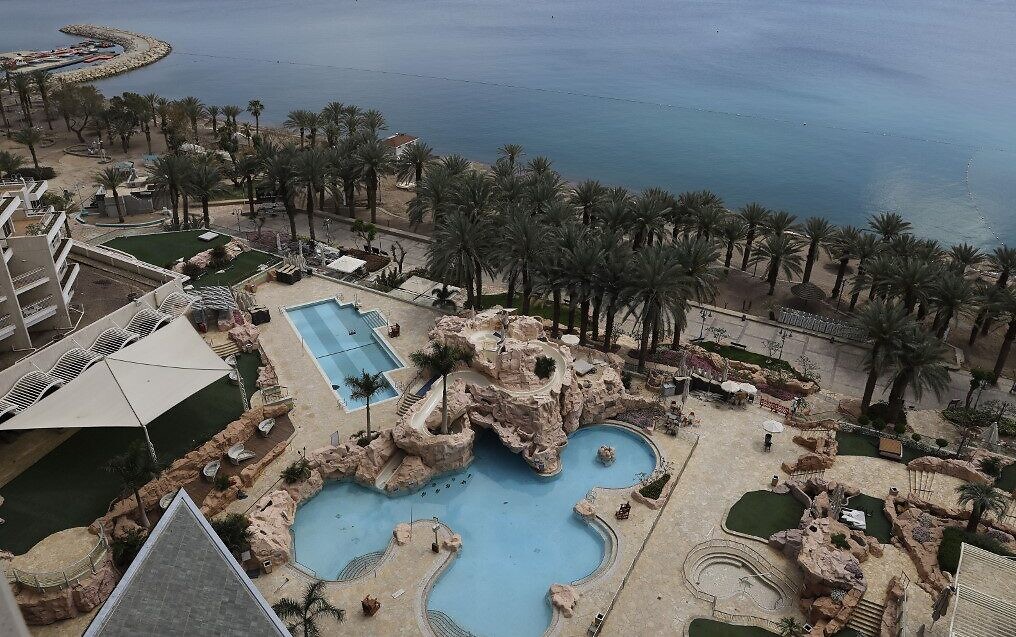 The empty swimming pools at the closed Dan Eilat hotel in the Red Sea resort city of Eilat on April 17, 2020, amid the coronavirus pandemic. (Menahem Kahana/AFP)

Other businesses, including those in tourism, culture, events and leisure, have already laid off workers and will face a longer road to recovery even after government restrictions have eased.

Consumer behavior in Israel and abroad is likely remain altered long after the crisis, with people less willing to travel, eat at restaurants, or attend crowded events. Demand will take a hit due to unemployment and lost income and assets. Uncertainty, including fears over additional virus outbreaks, will further decrease nonessential spending.

Workers from these hard-hit industries, most of whom were laid off or placed on unpaid leave in March, face an uncertain future. They come from a variety of backgrounds — restaurant workers are largely unskilled and young, cultural event employees include artists, performers and technicians, and the tourism industry supports professionals including pilots, guides, travel agents and security personnel.

The younger, less skilled workers were the first to suffer job losses, but permanent layoffs are likely to expand into the larger labor market and affect skilled and educated employees. Over half of people currently laid off are under 34, the report said.

In addition to the unemployment figures, tens of thousands of businesses will likely collapse.

Over 35,000 self-employed people, and some 320,000 workers employed by 11,000 small businesses, earn a living in the hospitality and food industries. Most will probably not weather the crisis. The income from these businesses indirectly supports tens of thousands more people and buoys the local economy.

There are some 530,000 self-employed workers and owners of small businesses in Israel, compared to some 3.8 million salaried workers, according to data provided by Federation of Small Business Organizations and the IDI. The self-employed do not have social security benefits that salaried workers have when they lose their jobs.

The cabinet earlier this month approved emergency grants for self-employed Israelis whose businesses have been hit by the coronavirus pandemic.

An NIS 8 billion ($2.2 billion) coronavirus fund — earmarked for small and medium-sized businesses and backed by government guarantees — has been met with heavy criticism as the majority of loan applicants have reportedly been turned down.

Earlier this month, the government approved emergency grants for self-employed Israelis whose businesses have been hit by the coronavirus pandemic. The funds will go to businesses that have seen at least a 25% decline since the start of the crisis in Israel in March, compared to the same period last year.

Many self-employed small businesses owners have decried what they say is a lack of state assistance, with hundreds rallying near the Knesset Sunday to call for the government to help them weather the crisis.

Many workers from the hardest-hit industries will likely need to go through professional retraining and change careers. The government allocated NIS 200 million ($56 million) for retraining programs.