The US government’s Commodity Futures Trading Commission has charged two Israeli citizens and an Israeli company with securities fraud in a binary options and cryptocurrency scheme that allegedly earned $20 million.

On May 7, the CFTC announced that it had filed a civil lawsuit against Tal Valariola and Itay Barak, their company Digital Platinum Ltd. in Herzliya, their Florida-based business partner Eric Fingerhut, and other companies associated with them over “two massive fraudulent solicitation schemes” involving binary options and cryptocurrencies.

According to the CFTC complaint, the defendants were affiliate marketers for various binary options and cryptocurrency trading websites.

Tal Valariola is the son of Aaron Valariola, a retired Israel Police commander who led investigations into organized crime and financial crime.

Itay Barak is the son of Avi Avraham Barak, a former director of several publicly traded Israeli companies, including the telecom giants Bezeq and Pelephone. Avi Barak owns a 5 percent stake in Digital Platinum Ltd., the Israeli company sued by the CFTC, but has not been named as a defendant. 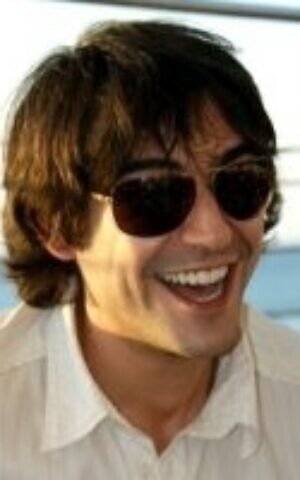 Itay Barak, one of the owners of the Israeli affiliate marketing company Digital Platinum Ltd. which was accused of fraud by the CFTC (LinkedIn)

The CFTC complaint alleges that the defendants created fraudulent marketing material that they sent to internet users through email spam or made available online.

The material included videos of actors who portrayed themselves as real people who had become rich trading binary options or cryptocurrencies. Posing with private jets and luxurious mansions, these actors promised to share their secrets for getting rich with a select group of viewers who signed up for the opportunity quickly.

According to the complaint, these videos led to more than 59,000 customers opening binary options and other online trading accounts. The defendants received between $350 and $450 for every “first time depositor” (“FTD”) to an online trading website and allegedly earned a total of $20 million in commissions.

Valariola and Barak were allegedly “affiliate marketers” for the fraudulent binary options and fraudulent cryptocurrency trading industries. Affiliate marketers receive a commission for selling a third party’s product over the internet. While affiliate marketing can be used to sell legitimate products like books or non-fraudulent apps, the part of the industry that pays the highest commissions tends to hawk products like fake pharma, online gambling, fraudulent forex websites, and binary options. The actual online brokers then go on to fleece their victims out of significantly higher sums, thus making the high commissions they pay to the marketers cost-effective.

According to the complaint, Valariola and Barak allegedly acted as intermediaries between the Florida-based Fingerhut, who allegedly created many fraudulent videos, and the owners of websites that the fraud victims ultimately lost their money to. The complaint does not name the websites that Valariola, Barak and Fingerhut allegedly sent traffic to, but many of these sites likely operated from Israel. 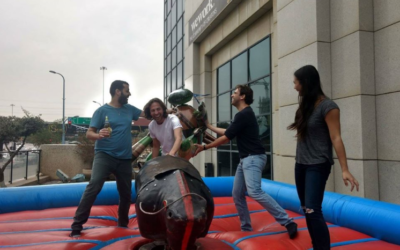 Digital Platinum employees ride a mechanical bull outside their office in Herzliya in a photo dated November 26, 2018 (Facebook screenshot)

“Valariola and Barak acted as the intermediary between [Fingerhut] and the recommended brokers, were responsible for the backend operations of the affiliate marketing campaigns, collected and distributed commission payments, procured sales videos for [Fingerhut] to use in its campaigns, and supplied the marketed Trading Systems, among other things,” the suit alleges.

The CFTC lawsuit was filed in the Southern District of Florida and is a civil, as opposed to a criminal, enforcement action. If the judge ultimately decides in the commission’s favor, the defendants will be required to pay fines and restitution but will not face imprisonment.

The Times of Israel contacted Valariola, Itay Barak and Avi Barak for a response to the allegations but did not hear from them prior to publication.

The binary options industry flourished in Israel for a decade before it was outlawed via Knesset legislation in October 2017, largely as a result of investigative reporting by The Times of Israel that began with a March 2016 article entitled “The wolves of Tel Aviv.” At its height, hundreds of companies in Israel employed thousands of Israelis who allegedly fleeced billions of dollars out of victims worldwide. The fraudulent firms would dupe victims into believing that they were successfully investing and earning money, encouraging them to deposit more and more into their accounts, until the company eventually cut off contact with the investor and disappeared with all or almost all of their money. 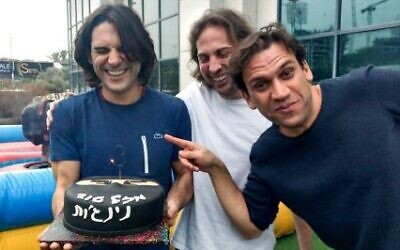 After the industry was outlawed in Israel, many of its operatives moved their call centers abroad, while others merely changed the name and superficial attributes of the financial product they were ostensibly offering and continued to defraud investors as before.

The CFTC complaint describes how starting in October 2016 and through August 2018, the defendants marketed digital assets like Bitcoin and Ethereum instead of binary options, but indicates that their alleged fraudulent activities were very much the same.

The “defendants… engaged in a fraudulent solicitation scheme similar to the one carried out [previously] but focused on digital assets instead of binary options,” the complaint alleges.

Looking for change in their lives

Among the dozens of videos allegedly disseminated by Valariola and Barak was one called Fastcash.biz and another called Push Money App.

These videos played to the feeling many people experience in life of being stuck and unable to achieve the social status or financial comfort they aspire to.

In Fastcash.biz, a friendly woman and man who call themselves Madison Clark and David Graham drive around in a Bentley, fly in a private jet and entertain guests at a mansion while promising to share their secrets for getting rich with a select group of “beta testers” of their system.

“I’m assuming since you were sent here, that you’re probably looking for a little change in your life,” says the man.

The pair introduce one of their satisfied customers, Mary.

“I live in a small town just outside of Wichita, Kansas,” she says. “And I’m 50 years old… I was just recently divorced after being married for 28 years. I took it hard. I really hit rock bottom. My ex-husband had always been the breadwinner of the family.”

According to “Mary,” Fastcash.biz exceeded all her expectations.

“I knew that if I could just generate a little bit of income, that would at least allow me some comfort and satisfaction. But I never knew my life would turn into what it is today. I happened to be in just the right place at the right time. By the grace of God, it had to be.”

In “Push Money App,” a handsome, well-dressed actor describes the mortification some viewers may experience when their credit card is declined.

“It’s embarrassing isn’t it? To find out about that when you’re out on a date with your spouse or with someone you hope will be your spouse. When the waiter slaps the card down on the table with the word ‘declined.’ He slaps your self-esteem down in the process….If that’s you or anything like that has ever happened to you..the universe is telling you something. It’s telling you that the amount of money you make is an embarrassment, to yourself and to those around you.”

The remedy for this humiliation, the man says, is to trade binary options.

“My playground is the binary options market. Because it’s the fastest place to get rich, bar none. The smartest traders in the world are there, because they know where the bread is buttered.”

Sons of the Israeli elite

The CFTC complaint highlights how allegedly fraudulent business activity has penetrated the mainstream, even the elite, of Israeli society.

Itay Barak is the son of Avi Barak, a former director [Hebrew] of Israeli telecommunications giants Bezeq and Pelephone as well the former president and CEO of the Yissum Research Development Company, which commercializes scientific breakthroughs made at Jerusalem’s Hebrew University. Avi Barak himself owns 5 percent of Digital Platinum Ltd., which was accused of fraud in the CFTC’s complaint. 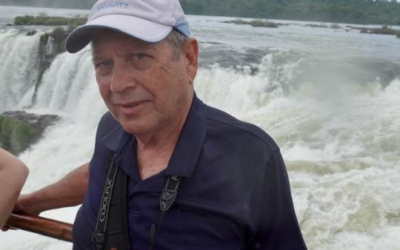 Tal Valariola is the son of Aaron Valariola, a retired police commander who was one of four department heads in Israel’s police unit for economic and financial crimes.

A news report [Hebrew] from 2013 described Aaron Valariola as having recruited a state’s witness against feared Israeli crime boss Riko Shirazi, who was sentenced to eight years in prison in 2015.

In 2008, he is reported [Hebrew] to have orchestrated the bust of an Israeli-Pakistani-Serbian drug smuggling gang in collaboration with police from other countries.

“We contacted the DEA in the United States. They have a branch in Cyprus,” he told the Makor Rishon newspaper. “It is considered one of the biggest units in the world combating drugs. At the same time we updated the German police, after we learned that some of the investors in the drug deal were German criminals. We synchronized our activities with three police units worldwide that all followed our [drug smuggling] boat.”

Two of Aaron Valariola’s other children also worked at Digital Platinum Ltd., which was founded in 2013, after his retirement from the police force. 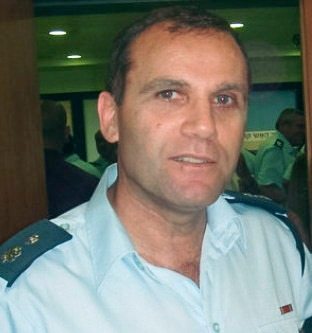 A 2014 legal dispute that Itay Barak and Tal Valariola had with one of their clients, the binary options broker EZTD, sheds light on how the young men got involved in affiliate marketing.

“The plaintiffs are professionals with various skills in the internet industry in general and in the areas of gambling, dating and e-commerce specifically,” one of the filings reads.

For instance, according to Itay Barak’s LinkedIn profile, he worked briefly as an affiliate marketer at Mansion Group, a gambling company whose ownership is unknown, despite having been founded in 2003 and having sponsored numerous British football teams.

How and why Israel became a hub for online gambling, online financial trading and payment processing for fraudulent e-commerce is a story that remains largely untold.

The CFTC complaint throws into stark relief the failure of Israeli law enforcement to prosecute any binary options operatives on charges related to their binary options activity (a few have been charged with unrelated offenses). This has led to a situation where thousands of unprosecuted fraudsters are walking around Israel enjoying their ill-gotten gains and suffering little social stigma or fear of punishment, except on the few occasions when a foreign law enforcement body brings charges against a small portion of them. So far, the United States Department of Justice has prosecuted about two dozen Israeli binary options operatives, while the SEC and CFTC have brought civil charges against numerous others.

The CFTC thanked the Israel Securities Authority, the Federal Bureau of Investigation, the Securities and Exchange Commission, and the Department of Justice for their assistance in the enforcement action. The CFTC staff members responsible for this case were Candice Haan, Allison V. Passman, Joseph Patrick, Susan J. Gradman, and Scott R. Williamson.