Nvidia Corp., the US gaming and computer graphics giant that acquired Israel’s Mellanox Technologies Ltd. for $7 billion, will employ 100 Palestinian engineers who are working as subcontractors at Mellanox as salaried workers.

The engineers, working in the Palestinian cities of Hebron, Rawabi and Nablus, were formerly employed as outsourced contractors, Eyal Waldman, Mellanox co-founder, said in a Facebook post published in Hebrew, English and Arabic on Wednesday. The workers from Gaza will remain subcontractors, for the time being, he wrote.

“First and foremost, this is a historic moment and an unprecedented achievement for the Palestinian workers,” he wrote. “It is their commitment, their professionalism and their excellence, that has led to the completion of this historic moment, in which a leading international high-tech company directly employs personnel in the Palestinian Authority.”

“We set out 10 years ago with a small team of only five people, we’ve weathered through criticism, we went through military conflicts and operations, and along the way it was clear to us that the joint professional work comes first. The daily positive interactions between Palestinian and Israeli teams have repeatedly demonstrated the immense potential inherent in a respectful discourse between people and the ability to put aside opinions and perceptions and unite together in one common goal,” Waldman wrote. 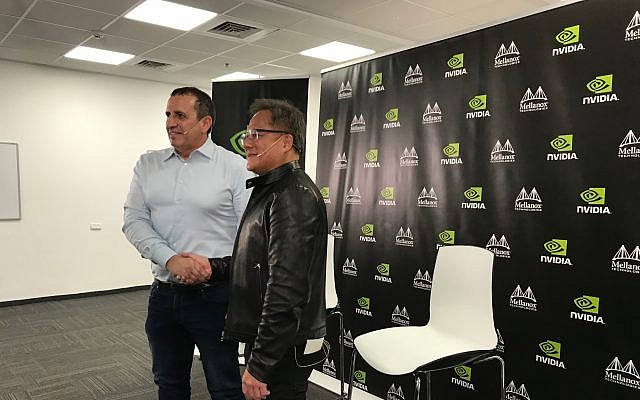 The Palestinian teams “play an integral part in the company’s success story,” Waldman wrote. “What began as an economic and efficient outsourcing solution, soon became a professional fraternity and a beacon for the ability to maintain a healthy and respectful discourse between peoples.”

Mellanox outsources some 100 software development jobs to Palestinians via ASAL Technologies, a Palestinian tech company it partnered with seven years ago. ASAL was based in Ramallah but is now located in Rawabi, a new West Bank city in an area controlled by the Palestinian Authority. Rawabi hopes to become the center of an emerging Palestinian high-tech economy.

All of the subcontracted engineers in the West Bank will now be salaried workers at Nvidia, Waldman said in phone interview with The Times of Israel. The firm is now looking to see how the additional 20 engineers subcontracted in Gaza can also become part of Nvidia staff, he said.

This change of status is “very significant” for the workers, Waldman said in the interview. It will open new opportunities for them within Nvidia, he said, giving them certain rights and offering them a variety of roles within the US firm, including relocation.

“They become part of the big company, and this opens them very many economic, professional and personal opportunities,” he said.

Mellanox has been outsourcing programming jobs to Palestinians in the West Bank since 2010 as part of Waldman’s push to improve relations between the two sides of the Palestinian-Israeli conflict. Israel also suffers from an acute shortage of engineers and programmers, and the Palestinians offer Israel based firms a growing pool of talent that they can tap into, instead of hiring in India or Ukraine.

In his Facebook post, Waldman called on other Israeli and international companies to employ Palestinian workers. “In these days when polarization, hatred, nationalism and violence ware taking up more and more space in our country, in our regions and our world, let us find the power to see the good, the right, the humane, the innovative, the conciliatory and the tolerant which exist in both sides and in every one of us,” he wrote.