An Israeli startup, Redefine Meat, unveiled Tuesday what it said was the world’s first plant-based steak created using industrial 3D-printing and said it will start testing the alt-beef cuts at high-end restaurants in Israel as soon as next month, followed by marketing in Israel and elsewhere.

“We are actually printing steaks,” said Eshchar Ben-Shitrit, who set up the company, formerly known as Jet Eat, in 2018. “We have a product. It is something we are doing already in large amounts.”

The product fully replicates the muscle structure of beef. It is high-protein, no-cholesterol and looks, cooks, feels and tastes like beef. 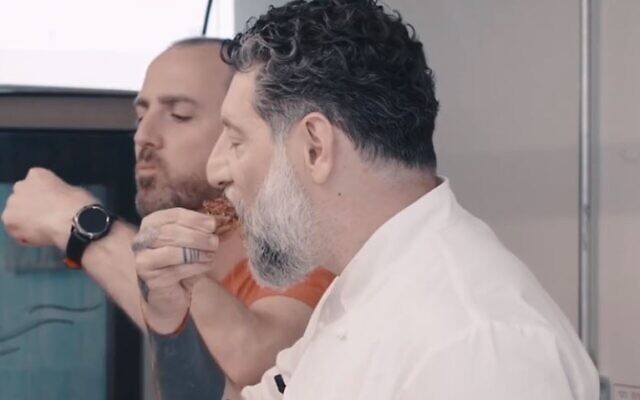 The firm recently hosted Israeli chef Assaf Granit at its offices for a tasting. The chef said, in a video for The Great Big Jewish Food Festival, that eight out of ten people wouldn’t know the difference between real meat and the alt-meat produced by the company, and that the flavor of one of his recipes made with the Redefine Meat product was “almost identical” to the original.

The global meat substitute market is expected to reach $8.1 billion by 2026, according to data firm Allied Market Research.

Firms that have made headlines in the sector are the Los Angeles-based Beyond Meat Inc, a Nasdaq-traded producer of plant-based meat substitutes whose products simulate chicken, beef and pork sausage, and are available at most grocery stores in the US and at restaurant chains.

Another firm is Impossible Foods Inc., a California firm that selects proteins and nutrients from plants to recreate the experience and nutrition of meat products. The firm launched the Impossible Burger in 2016, available in grocery stores in the US; its plant-based sausage product is available at Starbucks in the US.

In Israel, Aleph Farms Ltd. has created a test-tube steak, using meat cells, which it says looks and feels like steak but was produced without killing animals. 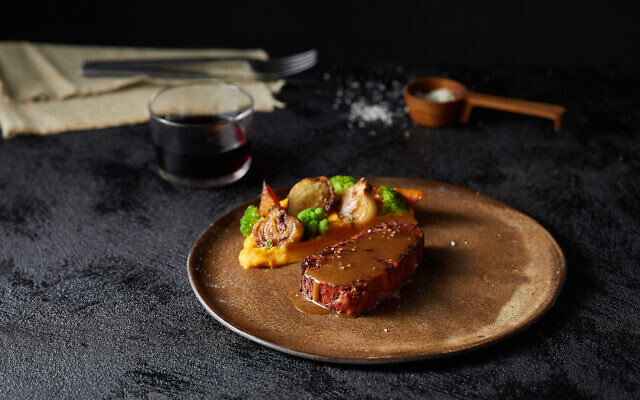 Redefined Meat uses 3D printers and “ink” to “print” the steaks. The firm aims to sell the printers and the cartridges to meat distributors worldwide, who will both print and distribute the meat once produced.

The “ink” is made out of plant-based ingredients similar to what a cow eats, explained Ben- Shitrit in a phone interview. It contains proteins from legumes and grains, to create the muscle texture of the alternative meat; it also contains fats from the plants, to mimic the beef fat, and natural flavors and colors, to mimic the blood factor in meat and its juiciness.

“It is very unique to us; we are the only ones doing this. We come very close to how the composition of meat is in nature, and our 3D printer essentially is like a very complicated robot that knows how to take each one of these ingredients and in a very accurate manner… builds a food product.”

These are all combined with water and put into three ink cartridges that are loaded into a 3D printer the size of a big fridge. 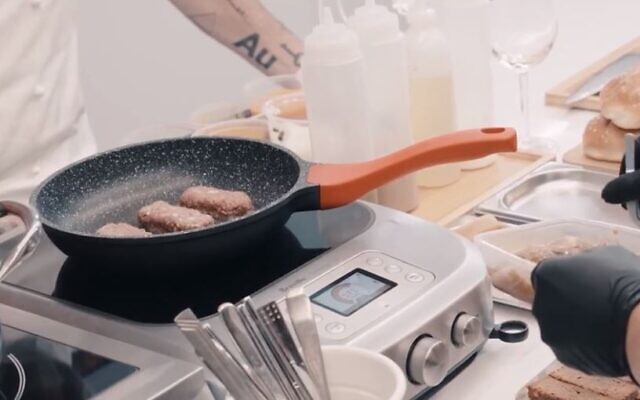 A screenshot of Redefine Meat being cooked, May 2020 (The Great Big Jewish Food Festival)

In the printer, the materials undergo a process of food engineering, and the final product ejected by the machine has the structure of muscle, and fat and blood similar to a cow’s, he explained.

The machine prints “one dot over the other, and the product is built from almost one million dots,” Ben-Shitrit said. Software can dictate exactly what kind of steak to make, e.g., an entrecôte, by arranging the dots differently, he added.

“By using separate formulations for muscle, fat and blood, we can focus on each individual aspect of creating the perfect alt-steak product. This is unique to our 3D printing technology and lets us achieve unprecedented control,” he said.

Production capacity of each machine is six kilograms an hour (13.3 pounds); eventually it will reach 200 kilograms of meat a day, he said.

As the coronavirus pandemic has wrecked plans to test with chefs in Germany and Switzerland, the focus will be exclusively in Israel, he said. Based on feedback from chefs and butchers, the company will then ramp up production of its 3D meat printers and alt-meat formulations ahead of market distribution in Israel later this yearglobally in 2021.

The idea, Ben Shitrit said, is not to create another vegan dish on a restaurant’s menu but to actually offer diners the option of ordering a real, meat-based chef’s dish with the Redefine Meat option. 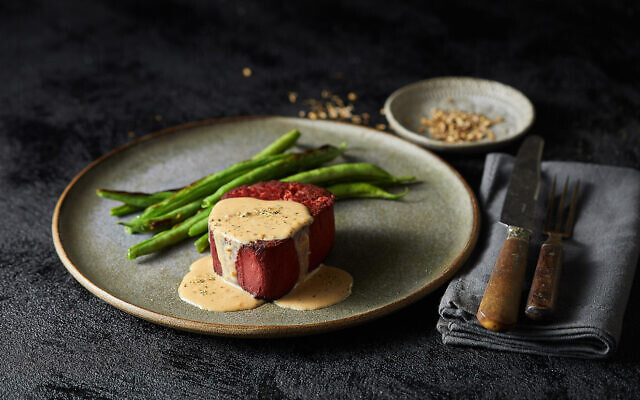 The technology is able also to produce chicken, pork, lamb and red tuna, he said. But the focus at the moment is on beef, because cow breeding for the meat industry is a huge environmental concern.

The cost of the meat will be similar to that of beef, Ben-Shitrit said, and the products developed by the printer already have the Kashrut nod of the chief rabbi of Ness Ziona, he added.

Because the products use existing approved food ingredients, there are no special FDA requirements, he said.

The technology also has the potential to disrupt the food supply chain globally, he added. The 3D printers, which produce meat close to the point of sale, remove the need to source meat from around the world.